Clinical France make the most of Ireland’s shortcomings 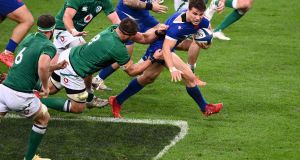 This was an odd, fluctuating affair which was both encouraging from an Irish perspective but also a little sobering. They went toe-to-toe and threw plenty of punches, yet were picked off a mite too easily and ultimately kept at arm’s length by a more potent French side.

Hence, we were reminded that more than most sides, and certainly more than this revitalised French team, Ireland have to virtually get everything right to have a chance of winning games like this and with it Six Nations titles.

Prior to their flight home, and echoing Andy Farrell the night before, CJ Stander paused long and hard before also coming to the conclusion that Ireland needed to take more of their chances.

“We just need to be clinical. If you get opportunities, but if you have three or four big errors and spilled bills and a bit of confidence slips away from you, then suddenly you are on the back foot. We need to start games the way we want to start it. In a Test like that, you need to take your points. You need to get your tries from your set-piece.”

As if to underline the point, Ireland spent considerably longer in the opposition 22, four minutes and 25 seconds, than France (one minute 39 seconds) did in the Irish 22. Then again, Ireland are not the type of side that scores long-range tries, but rather from going through the phases deep in their opponents’ territory.

Indeed, much of that four minutes and 25 seconds was probably used up while Anthony Bouthier was in the bin and Ireland patiently kept pressing off lineouts and scrums until Andrew Porter and James Ryan helped the centurion, Cian Healy, over the line.

Ryan and Tadhg Beirne had particularly big games but for Ireland to beat France they had to keep doing that and be more accurate than they were there, especially in the second half.

So much of Ireland’s game revolves around going to the corner and executing lineouts and mauls. Hence, central to the second-half unravelling was the loss of three attacking lineouts, notably one five metres out when the ball seemed to slip through Peter O’Mahony’s fingers.

Ironically, their second try through Robbie Henshaw’s superb individual effort when using his footwork, balance and strength to leave four blue shirts in his slipstream, emanated from Dave Heffernan tidying up a loose lineout.

Yet while Ireland left definite possibilities (more than clear chances) behind, they still managed 27 points, equalling the 27-25 winning tally in 2000 as the joint second-highest points total ever achieved by an Irish team in Paris.

On the other side of the coin though, it’s hard to win a game of rugby when conceding 35 points. And therein lay the difference. France were always favourites to win this game because they have more game-breakers, particularly in the incomparable half-backs Antoine Dupont and Romain Ntamack, and without ever really producing sustained pressure, they were able to conjure tries in the blink of an eye ala the All Blacks.

Dupont finished off the first try after Gaël Fickou punished a defensive mistake by Johnny Sexton which left him with a one-on-one against Andrew Porter on the wing. Ntamack set up Virimi Vakatawa for the fourth try when dropping the ball nonchalantly onto his weaker left boot and regathering on the full to expose Ireland’s preference for having the scrumhalf in the defensive line rather than sweeping.

In between times, Dupont and Ntamack combined for the try of the night when the latter countered off Bouthier’s take and eventually scored after Dupont gathered Fickou’s chip ahead, took Stockdale’s tackle and deliberately looped his offload over the covering Caelan Doris. It was one of 14 French offloads to three by Ireland.

When Toulouse are strong so are France, and by going back to their DNA of playing instinctive, heads-up rugby, they have bestowed upon Les Bleus some timely gifts.

Now, after a decade of going through half-backs as if they were disposable coffee cups, Fabien Galthié and co have hit upon a 23-year-old (Dupont) and 21-year-old (Ntamack) with just 44 caps between them who, come the next World Cup, have the ability to be the best half-backs in the world.

Ireland aren’t alone in not having that in their armoury. Conor Murray’s running threat is not what it was circa 2017 and 2018, but he and Sexton are still Ireland’s best halves and there was much to admire in the way they pulled the strings here.

Sexton’s angled grubber for Hugo Keenan that led to Bouthier’s binning was a delight. Bundee Aki was a constant source of go-forward and Henshaw had a huge game but, alas, Jacob Stockdale was Ireland’s most error-prone player whose misfortunes were usually magnified by what followed.

On a wet night in Paris with a slippery pill, France were better served by Bouthier’s greater solidity, especially under the high ball. Dupont’s try originated in one of many fine takes by Bouthier before Vincent Rattez retrieved Dupont’s box kick from over the touchline under no pressure from Stockdale.

It was Stockdale’s fumble from a grubber by Rattez which led to the French penalty try and the sinbinning of Doris.

By contrast, Bouthier dealt with a Sexton chip, an Aki grubber and a Sexton bomb before his offload to Ntamack sparked the latter’s try. Even Stockdale’s fumble after freeing his hands for an offload to Keenan led to the scrum from which Vakatawa scored.

Yet all the while Stockdale was the Irish player who looked the likeliest to make something happen when on the ball. To his credit, despite such an unhappy night, he never stopped showing up and in overtime he had the glummest non-consolatory final say with a smart finish from Keenan’s offload.

Of course, the damage was long since done.