Joanne O'Riordan: The slow death of the authoritarian, ‘old-school’ coach

Some Matildas players revelled in the approach of sacked Alen Stajcic. Others did not 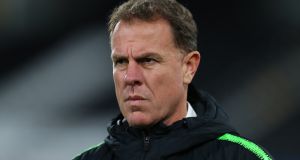 Being a manager of an elite sports team is a crazy old world nowadays, and everyone seems so fickle. Management is changing. Long gone are the days when players enjoy being fired up with a good verbal assault. Even with women in sport, we find ourselves looking at old-school head coaches and are beginning to say “enough”. As a result there have been some turbulent times for many high-performing teams at the top of their sport.

The notable flashpoints so far include Mark Sampson and the England women’s national team; the Carnacon group in Mayo, after a devastating spat with management; and now, in Australia, the newly professionalised Socceroos find themselves in a similar row with manager Alen Stajcic.

No longer are players fired up or motivated by being called out or scorned. Managers and head coaches are now there to facilitate the needs of a player.

Step forward Stajcic. The newly professionalised Australian women’s team were conquering all around them, led by sensational striker Sam Kerr. Stajcic and his two assistants, Heather Garriock and Paul Jones, all came with a win-at-all-costs mentality, even when the Australian team were at an amateur stage. When a team jumps from part-time amateurism to full-time professionalism standards, we can sometimes see how the atmosphere and the nature of a group can be perceived as negative.

Stajcic was one of the first coaches in Australian women’s soccer to oversee an entirely professional model. With the stakes now higher and pressure mounting with a new drive for success, the group had to endure an unprecedented workload. Some women were playing 60 games across the calendar year, generally across three teams (national league, an overseas league to make better money and the national team). As a result of this, their nutrition, fitness and tactical management were being mismanaged, causing injury rates to soar.

Everyone knew Stajcic was a tough, authoritarian leader, but he was not the first, nor will he be the last, of the “pure football men”. Stajcic himself was incredibly proud to come from the football system. He was a former state league player who came through high school sports programmes as a coach, progressed to state institutes and then on to the W-League, where his success with Sydney FC earned him the Matildas post in 2014.

He knew what he wanted in players. He wanted them to be as fit as humanly possible (despite being amateurs for a large portion of his tenure). He wanted them to be tactically flexible and he especially loved those who could play in numerous positions. While some players would comment that his tactical talks would have an “old-school tone”, many would revel in it. Some did not.

And he also wanted an insane standard in facilities. With his high standards, his issues with the Football Federation Australia (FFA) and a powerful group of players within the team that became known as the “lesbian mafia”, it was only a matter of time before it all came to a head.

Reports began to emerge this year of teenage players starting to feel bullied, developing eating disorders as a result of staff weight jokes and the high number of psychologically distressed members of the team who were surveyed and responded with concerns. Some members of the team are annoyed the results of the survey resulted in the sacking of their perceived beloved manager, and while this support is genuine, others just did not want to see their long-term head coach removed.

The saga raises several issues, the main one being that something needs to change within the entire elite team culture if we want girls to be honest in their evaluations and not have them targeted for retribution.

The other issue is the shift in managerial styles that we see across the board. The authoritarian managers are being overlooked for laissez-faire, be-your-buddy kind of coach. Player wellbeing and mental health are considerable factors for modern-day athletes.

Sporting culture continues to change, and the stakes of professional sports continue to rise so it is natural that with the increased spotlight shining strongly down upon women in sport, it is only be a matter of time before more managers fall under scrutiny.