Meet the sisters hitting the slopes with Olympic dreams for Ireland

Raised in Austria, skiers Giorgia and Gloria Lyons have an eye on the Youth Olympics 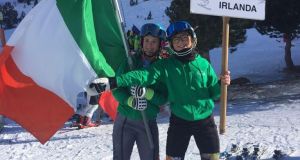 Giorgia (left) and Gloria Lyons. With just 13 months between them, they race in the same age category every second year.

Successful skiers are made in the summertime, or so goes the slogan ruling the Lyons sisters’ lives. Competing for Ireland at youth level in Alpine skiing, their year is dedicated to balancing school-work with snow fitness.

Giorgia (15) and Gloria (16) were raised in their mother’s home of Austria, but have kept close ties with their Dublin family through their father. Giorgia says they have no qualms about flying the green at competitions with their ultimate goal being the Youth Olympics team.

Giorgia represents Ireland at the international Trofeu Borrufa 2019 in Andorra, beginning January 26th, and takes her skiing very seriously. But she seems to have also inherited the Irish love of mixing fun with work.

“In Austria they say if you’re not winning and doing well by 12, you should just give up,” she says. “ I enjoy the skiing more in Ireland, they’re all really nice and they love skiing. You have to be good enough but they love doing it too. In Austria, it’s usually more serious, it’s not always about enjoying it. I like carrying the Irish flag, it’s nice.”

Both girls started racing at three years old which is normal when you grow up on the slopes, explains Giorgia. And with just 13 months between them, they race in the same age category every second year.

She laughs when asked if this is stressful and says it’s the opposite as they get similar bib numbers so whoever goes first can give the other tips on the course.

They race in the slalom and giant slalom events; these are high-speed races between poles set up to make gates at regular intervals apart. She explains that skiers veer in very close to the poles, usually knocking them into the snow as they power past – every centimetre gained counts in the race against the clock to the finish line.

Youth level events are staged on slopes with the Olympics at adult level also including a steep downhill event.

“The gates in slalom are about 10 to 12 metres apart, you don’t have to knock them but if you want to go faster, it helps,” Giorgia says. “ And with the giant slalom the gates are about 30 metres apart. They’re mostly on flat, but it can be steep. And sometimes there are jumps, not so big; about two or three metres.”

The slalom event, she says, is more about technique as the gates are so close together that tiny movements make a difference. On the giant slalom course, and the even faster super-giant it’s all about the speed. How much speed? Skiers like American Lindsay Vonn at the Olympic downhill event have clocked over 135/km per hour.

The need for going so fast is what drives the year-round training – core strength and stability are vital. The sisters swim a lot in the summer, and focus on stabilisation exercises. They build stamina by biking on the roads or hiking in the Austrian Alps, and of course they run.

So excited to have this great opportunity once again! I'll be representing Ireland at the Trofeu Borrufa in Andorra in January ... and I'll give it my best. Can't wait to join the team! @SnowsportsIRE @BORRUFA1 #skiforireland 🇮🇪 ⛷️ https://t.co/B56zPjXuQi

Summers in Dublin visiting family also mean long runs on the beach, and hiking when they can.

As Giorgia names a seemingly-never-ending list of training activities, the girls’ mother Elisabeth cuts in to explain the risks of skiing at this level without proper preparation.

“If you’re not fit enough to finish, you could get hurt,” she says bluntly. “You have to be careful. There is a big difference between skiing for fun and racing, you have to practice the timing and you have to be ready.”

She also skis but just for fun, saying she leaves the competitiveness to her daughters. Their younger brother Jake (10) is also shaping up to be a good skier, and Giorgia describes him as “quite fast”.

Asked who she admires, Giorgia names American Olympian Mikaela Shiffrin, who competes across different disciplines in skiing and took her 52nd World Cup victory at the start of January.

“She’s very cool, she’s won everything. She won at the Olympics twice, she’s really good. And she always looks like she’s enjoying it, it would be cool to be as good as her. We will have to see, I’m trying and maybe I will make it, or maybe not – I don’t know,” she says.

She also talks about English Olympian Dave Ryding. He’s famous on the ski circuit for having learned on dry slopes instead of mountains, and only skiing on snow for the first time at the age of 12. Giorgia thinks this is great as it goes against the received wisdom in Austria where dry slopes are looked down upon.

Elisabeth explains you need a different technique to ski on dry slopes, with a shorter course-time. It also hurts more to crash-land on plastic instead of powder snow. She says the standard is very high in Ireland, with most skiers learning on the dry slopes but spending as much time as possible in countries like Austria and Italy.

The sisters came to the attention of the Snowsports Association of Ireland (SAI) when they competed at Kilternan at the Irish Open Artificial Slope Ski Championships in 2016 and 2017.

Shane O’Connor from SAI says the youth snow scene is evolving in Ireland, with a mix now of local skiers and those like the Lyons living abroad. On hearing Giorgia’s assessment of the Irish attitude to skiing, he says ruefully that as everyone at SAI is a volunteer, passion is definitely what drives them.

“It’s worth saying too that of the eight Irish athletes eligible for the European Youth Olympic Festival depending on qualification points, seven are girls including Gloria Lyons,” he says.

The Fédération Internationale de Ski (FIS) runs races for all age groups around the world, with points stacking up to qualify for the top international events like the festival in February.

This of course raises the question of money and funding. Like most youth skiers the girls are mainly funded by their family. The more events skiers race in, the more points they have and the more likely they are to qualify for major elite-level events. And in a tale similar to many sports, the more high-profile events a skier participates in, the easier it is to get sponsorship.

Luckily, when competing for Ireland, some costs like accommodation are covered depending on the event. But it’s still a far from lucrative hobby.

They’re not alone in flying the flag from a distance for the Irish team, as fellow youth skier Irish-American Elle Murphy represents from Colorado, in the United States.

“It just sounded so cool, you get to race all over Europe and you’re representing Ireland,” Giorgia says. “ There’s some very good skiers in Ireland, so we still have to qualify. For me being on the Irish team every year is a major goal, you have to be good enough. I’m really excited now about Andorra, I’m doing regional races this month to get in form, it will be great to represent Ireland again.”

All going well, the Lyons will hit the slopes almost every weekend for the next three months.

All of this can play havoc with schoolwork. Living in Austria, the girls have understanding teachers but they still need to find the time to study. Giorgia says they know making it in skiing is a big ask, so fit in the study somehow but the sport is their passion.

“I’ve got four more years at school, and I can keep skiing at youth races. It would be so cool to get to the Youth Olympics, it’s in Switzerland next in 2020.”

The Lyons sisters blog at www.irishskiers.com