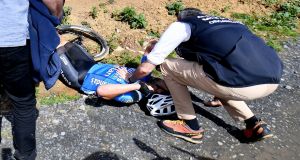 What a week for sporting tragedy. Five months after La Gazzetta dello Sport proclaimed the end of the world when Italy failed to qualify for the World Cup, they cried “La Rabbia E L’Orgoglio”– “Anger and Pride” – at the way Juventus exited the Champions League quarter-finals on Wednesday night.

There was anger alright – especially in the face of goalkeeper Gianluigi Buffon as he gently assaulted referee Michael Oliver for awarding the injury-time penalty which ultimately sent Real Madrid through. At age 40, in possibly his last game on the major stage, Buffon later accused Oliver of having a rubbish bin where his heart used to be. Or some words to that effect.

Three days earlier, the heart of 23 year-old Belgian cyclist Michael Goolaerts stopped beating around halfway through Paris-Roubaix, the longest-running and cruellest of the one-day spring classics. Cycling has endured many a tragic day, many more cynical ones too. It still carries a myriad of self-inflicted wounds and yet perhaps more than any sport has long understood the proper meaning of the word tragedy.

Goolaerts suddenly crashed off his bike on the second of the 29 sections of granite pavé, near the town of Briastre. He was found unconscious and not breathing, and treated at the scene by the race doctors. He was then airlifted to hospital at Lille, where he was pronounced dead at 22:40 local time, surrounded by family and friends.

“His dream was to ride Paris-Roubaix, ” Goolaerts’s agent and family friend Jef Van den Bosch told Cycling Weekly. “That was his dream, and it ended there.”

Indeed Sunday should have been the perfect day for Goolaerts and his team, Veranda’s Willems-Crelan. Born and raised over the Belgian border, at Heist-op-den-Berg, he was first drawn to cycling by the thrill of the one-day spring classics. The team were granted a wildcard entry for Paris-Roubaix, thus affording him a first attempt at the “Hell of the North” – the 257km between Compiègne, just north of Paris, to the finish line in the Roubaix Velodrome, close to the Belgian border.

Only he never made it – Goolaerts’s fatal crash announced not long after World champion Peter Sagan from Slovakia out-sprinted Swiss champion Sylvan Dillier to the finish line, thus claiming the €20,000 prize money, and a piece of priceless granite pavé screwed onto some wood.

On Thursday, the results of an autopsy indicated that Goolaerts suffered a cardiac arrest during the race, prior to the crash, rather than as a result of it. Part of the tragedy here is that his death prompted some inevitably familiar line of questioning: was doping somehow to blame? Even with no evidence or even suspicion in the case Goolaerts, cycling has only itself to blame for that.

For much of the 1990s, when EPO first became the drug of choice in the peloton, tales emerged of cyclists walking through hotel corridors in the middle of the night or spinning on stationary bikes in order to get their blood circulating to prevent clotting – or worse – such was their suddenly dangerous abundance of red blood cells.

Between 1987 and 1990, 20 young Belgian and Dutch cyclists died, some in their sleep, with or without alleged links to EPO use. One of them was Johannes Draaijer, a 27-year-old from the Netherlands, who finished 20th in the 1989 Tour de France, and in February 1990, died in his sleep of a heart blockage, a few days after completing a race in Italy. An autopsy did not specify the cause of death, though his widow later told the German news magazine, Der Spiegel, that her husband became sick after using EPO.

Some people will tell you that cycling has left that tragic era of EPO behind: what’s being asked after Sunday’s race is why an otherwise exceptionally fit and perfectly healthy 23-year-old should suddenly die of a heart-attack? Because in this cycling is certainly no exception.

Several similar cases have been highlighted in the aftermath of Sunday: in 2004, Belgian riders Stive Vermaut and Tim Pauwels both died due to cardiac arrests; similarly the Italian Alessio Galletti in 2005, the Belgian Frederiek Nolf in 2009, another Belgian Rob Goris in 2012, Gijs Verdick of the Netherlands and by Belgium’s Daan Myngheer in 2016, then just last year by the Egyptian rider Eslam Nasser Zaki. There was nothing suspicious about any of them either.

“One cannot automatically draw a link to doping in these cases,” said Professor Hans-Georg Predel, from the Sport University at Cologne, in an interview this week with German broadcaster Deutsche Welle. “It has been demonstrated that structural changes to the heart occur as a result of high-performance sports.”

Still there’s not much in this area. The Haywire Heart, published last year, is the first book to examine heart conditions in athletes, and presents some evidence that going too hard or too long can damage your heart forever – and not just the professional cyclist. It also identifies a group of conditions known as “athlete’s heart”, including arrhythmia, atrial fibrillation and flutter, tachycardia, hypertrophy, and even coronary artery disease, and also how to better diagnose and treat them.

It’s a subject that deserves closer attention. Cycling is not an inherently dangerous sport, non-contact (most of the time), with no motors involved either (presumably) – although it’s naturally not without inherent dangers. Risks will always be a part of it, the riders will always be aware of them, and these fresh warning signs shouldn’t go unnoticed.

On Wednesday, riders from team Veranda’s Willems-Crelan were back on their bikes, lining up at the start of the 58th Brabantse Pijl Flanders Classic, in Leuven. There was a minute’s silence and all the riders removed their helmets to recognise the sudden death of Michael Goolaerts for what is was: a proper sporting tragedy.