Sonia O’Sullivan: What is the draw of the extreme challenge?

From running in the Antartic to the Volvo Ocean Race, elite athletes like to go further 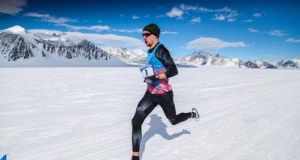 I’ve been following Annalise Murphy’s Volvo Ocean Race diary with interest, her quest to race around the world on board the yacht Turn the Tide On Plastic.

Just over a year on from winning her Olympic silver medal, it’s a whole new challenge for Annalise, a step into the unknown, the race not due to finish until June of next year.

The reports and pictures have been fascinating to follow, and so far they have only just completed two legs of 11. They are currently in Cape Town, with Melbourne the next destination; that’s 6,500 nautical miles where for a long time there will be nothing but sea all around.

She still plans to be back in the hunt for qualification for the Tokyo 2020 Games, and this should certainly keep her freshly motivated.

It reminds me how all athletes like to set themselves a new challenge, and how important that is, wherever that might take them.

Just last weekend in Antarctica, Paul Robinson, currently one of Ireland’s best middle distance runners, ran the fastest ever mile in the most southern continent. A rare event, but a new challenge nonetheless.

A mile run may not seem very extreme, but when you travel 24 hours to Antarctica, and step off the plane into a 30knot freezing headwind, just 650 miles from the South Pole, conditions alien to most, I think you are entering the realms of extreme.

The Antarctic mile may not be extreme in distance but it’s certainly unique and extreme in location, surface and surroundings

Paul ran four minutes and 17 seconds for the mile; and he ran alone into a seemingly never-ending line of whiteness, accompanied only by a drone overhead and a snow mobile alongside.

It looks fantastic – like he is gliding along in track spikes and one full-length layer of tights, long sleeve shirt, hat and gloves, trying to maintain some heat. It was -20C, and at 2,000 feet elevation, so far from ideal conditions. Still it was an impressive time. Last summer just four Irish men ran faster than this outdoors.

The Antarctic mile may not be extreme in distance but it’s certainly unique and extreme in location, surface and surroundings. A once-in-a-lifetime experience, no doubt something Paul will relive and retell for many years while still chasing his Olympic dream towards Tokyo 2020.

With some of that in mind I’ve also set myself a new challenge for March of next year, the Peaks Challenge across the Australian Alps. It still seems a long way off and I haven’t started to visualise what lies ahead yet over the 235km distance, climbing over 4,000m and likely to take up most of the daylight hours on the second Sunday of March.

I have started to get out on the bike every second day, setting myself some general training so that I am ready to start doing some specific training in the New Year when we are at Falls Creek for the annual training camp. It’s normally a family trip, Nic coaching athletes getting ready for the Commonwealth Games, Sophie will be with her running group, although Ciara will most likely to stay at sea level.

There will be plenty hours in the day for me to fill, and no better place to just ride out the door and hit the hills.

It seems like a bit of an extreme challenge for me but I know, compared to what others do, this is just on the edge of extreme and I’m told it’s perfectly manageable once you prepare properly. And that’s not just limited to hours on the bike but nutrition also.

There is no shortage of advice when you mention to people what you’re looking ahead to. Particularly if you happen to meet another lone cyclist out on the roads, who are open to engaging in some chat, not feeling challenged on their regular Sunday bike ride.

Last Friday I was out and happened upon another rider at the base of one of the more well-known climbs in the Dandenong Ranges.

We looked across at each other and agreed to share the journey to the top; he was 66 years old, and spinning away as we headed off. We were not even to the official start mark when I was being asked about my gears, and questioned if they were the most suitable for me and climbing mountains.

He might as well have been speaking a foreign language. I just like to get out and ride the bike. I can change the tube and put the chain back on but anything more and I leave it to the experts in my local bike shop.

We took turns leading as each km passed, a pretty efficient method of sharing the workload, with just 2km to the top it was becoming more obvious that maybe the engine was a bit more important than the gearing for climbing hills.

The Dandenong Ranges are just 40km east of Melbourne, where I did a lot of running down through the years. I never thought back then that I’d be cycling out and spending a few hours looping around criss-crossing roads and realising that our running loops in the Sherbrooke Forest were just a very tiny part of this great big woodland area.

I’m on the every second day plan at the moment, alternating with some easy running, so I was back out again early Sunday morning. There was a constant light soft rain, which would probably deter a few of the local cyclists. Worse for me, I set off in autopilot to lead the local bunch, before realising they were planning to head out on another parallel road.

I’d just have to put the head down, maybe intercept them further out the road. It’s always so much more sociable and you work a bit harder in a group than when heading out by yourself. I tried to keep myself occupied, watching the heart rate, cadence and speed, but the pedal strokes were long and slow as I started up the Devil’s Elbow, leading to One Tree Hill and beyond.

It seems there is an extreme challenge out there for everyone, and I wonder sometimes why we’re drawn to them

About half way up a rider went past me, not at great speed, so I latched on, and careful not to be seen as just hitching a ride, threw out a few words to break the ice. He’d been out for six to seven hours, he told me. When someone is out that long they must be training for something, and turns out he was training for an Everesting attempt in a few weeks.

This involves choosing any incline that is approved by the Everesting creators, and continuing to ride up and down the same incline until you reach 8,848m, the equivalent height of Mount Everest.

It doesn’t matter the length of the hill you choose. You might just increase the number of repeats you need to do, and you might be the first to Everest that particular hill. This can take a lot of planning and up to 24 hours to complete depending on your fitness and the feeding and rest breaks that you allow yourself.

It seems there is an extreme challenge out there for everyone, and I wonder sometimes why we’re drawn to them. I don’t consider myself in the extreme category, and do like to enjoy the challenge as well. We’ll see.

1 Cam Newton broke the mould: Can his flame be rekindled at the Patriots?
2 The Game Changers: Vincent O’Brien, a pioneer who took Irish racing to the world
3 Pete Sampras: The forgotten great with the best serve in the business
4 The unsolved mystery of Goran Ivanisevic’s stunning Wimbledon win
5 Tipping Point: DeChambeau’s transformation raises questions, but who will ask them?
Real news has value SUBSCRIBE
Here is your handy guide to sport on television this week