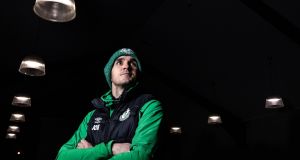 Shamrock Rovers’ Joey O’Brien speaks to the media ahead of the FAI Cup final against Dundalk. Photo: Tommy Dickson/Inpho

“I’m not saying that I want to be carried out,” says Joey O’Brien as he confirms that, after this weekend’s FAI Cup final, he will be playing at Shamrock Rovers again next season. “When I know that I’m done, I’m done; I’ll know when that time comes around but listen, I hope it’s not around yet.”

As he battled injury at a couple of clubs in England, others thought his race was run quite a while back. “Yeah, I had a physio a long time ago,” he says, still sounding a little put out, “and he said to me it could be a good idea looking towards something else and blah, blah, blah…

“That was the end of him really. He had nothing to do with my rehab again. As soon as he talked to me in that negative tone it was bang, he was gone. End of days for him. As soon as you have that negativity around you it’s no use. I worked with my own guy over in America.”

The single-minded way in which O’Brien got himself back playing then, and later, despite a succession of setbacks, is inspiring stuff and his character was clearly a huge part of what persuaded Stephen Bradley to sign him three years ago.

Still, the manager admits that he had to take some time to weigh the move up with bringing older players back from England always, he suggests, a tricky one. Now, even two months short of his 35th birthday, the scale of O’Brien’s contribution makes re-signing him a far easier decision to make.

Bradley’s concerns were natural, the defender suggests, with the coach entitled to be wary of an older – and previously injury-prone – pro who might be coming back to put his feet up.

“But listen, that’s never been me,” he says, emphatically. “I went to England at 15-16, and it never came easy for me if you look back on my career. I wasn’t going to come here and start swanning around thinking I owned the gaff. It’s not in me as a person.

“I’ve seen it happen at other clubs where people came in at the end, trying to get a last payday. But you don’t come here for a payday! I came here, to this football club, to win. One of the first meetings I had with the managers was about winning the league, winning the Cup. The level I played at, I was here to win for this football club. Luckily, we’ve won a couple of things over the past couple of seasons.”

Apart from being outstanding defensively himself, the presence he has around the place has helped get more out of others. He says it is an attribute he worked hard to develop ever since making his international debut almost 15 years alongside Andy O’Brien and being blown away by the way the more experienced man took charge of the defence, issuing orders and warnings but also encouragement.

“I came off the pitch and thought: ‘this is unbelievable’. I knew I needed to get that into my game.”

He pulled it off with gusto and his roars are a feature of every Rovers’ match now, all the more audibly so since the pandemic put paid to crowds at games.

“It’s probably not a good thing,” he says with a laugh. “One time my ma came to see me and said: ‘Jaysus, you curse a lot’. She only realised I did that when I was on a football pitch. A lot of the lads, when there was a crowd, probably didn’t hear me, or ignored me whereas now they can’t really ignore me because there’s no one in the ground.”

A lifelong fan of the club, he sounds content with his lot. He is happy to be bringing his young kids up at home in Dublin and be close to his wider family. He is, he insists, still learning every day and laying the foundations for a longer term future in the game even if he hasn’t quite settled on what exactly what that might be.

For the moment, he runs the club’s under-15 side with Ronan Finn with whom, he says, he has become a close friend despite the pair’s tendency to disagree on just about everything.

As much as anything, though, he is still happy to be playing… and winning. Being part of the Rovers team to complete the club’s first double in 33 years would be special but that won’t be him done.

“Hopefully there are a couple of years left, who knows? I have to try to play Champions League qualifiers, don’t I, to keep me going.” Nobody would be daft enough to suggest he doesn’t have it in him.