All in the Game: Roy Keane reading The Grinch, anyone?

Noughts and crosses at St Mary’s, legal filing of the week, quotes, numbers and more 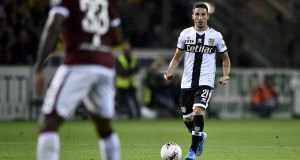 As Italy faces a prolonged period in lockdown after having experienced a surge in cases of coronavirus, including quite a few amongst its football community, and the death of Vittorio Gregotti, the architect celebrated for his work on sports stadiums including the one used for the Barcelona Olympics, one club has come up with a nice way of helping families get through the crisis.

“These are strange days,” tweeted Serie A side Parma to its followers, “and we really want to keep each other company, because we are stronger when united!

“So rush to tell your parents, we have an idea: what if Matteo Scozzarella were to read you a bedtime story tonight?”

Sure enough, young fans could tune in on the club’s Facebook page to Scozzarella reading two fairy-tales.

As they struggle to come up with ideas to keep the subscriptions coming in at a time when there is next to no actual sport to watch, expect BT and Sky to be all over this. Anyone up for Roy Keane reading The Grinch?

The sudden postponement of the Premier League has left an awful lot of people with too much time on their hands, not least those at the clubs themselves who have been desperate this weekend for a bit of competitive action.

In the absence of a game to go to at Carrow Road, the guys at Southampton’s social media department challenged their opposite numbers at Norwich City to a game of noughts and crosses.

They then took to taunting their rivals about the lack of a response before Manchester City stepped in to provide the opposition.

Despite the fact that City have no doubt assembled a crack squad of tic-tac-toe players from around the globe for just such an eventuality as this, the game turned out to be a scoreless draw. “Unbelievable scenes at St Mary’s” tweeted the BBC’s Match of the Day when the conest was midway through.

“We better not be on last tonight,” came the reply.

Stand by your men

Tottenham can have been under no illusions about what they were signing up for when they hired Jose Mourinho to succeed Mauricio Pochettino back in November but while the Portuguese has certainly made them less entertaining to watch, he seems to be stalling on the “initial improvement” phase of the deal and welching on the trophy-or-two-before-things-inevitably-turn-sour element.

The London club head into the enforced break to the season on a run of six games without a win and they currently sit seven points off the last of the four qualification places for next season’s Champions League. After the 3-0 defeat in to Leipzig during the week, Mourinho, who is certainly without some key players due to injury, made it abundantly clear that the current situation is not his fault.

“With the squad we’ve got at the moment, it (qualifying for next season’s Champions League) is going to be very difficult. All the players that were in Leipzig’s bench, they would all play in my team in this moment. So that is a big problem.”

Stand by your men part II

The rivalry between Brazil’s Port Alegre clubs Gremio and Internacional is, how shall we put this ... a somewhat passionate affair and things certainly got emotional this week when the two sides met in the Copa Libertadores.

The game ended scoreless but over the course of the last 15 minutes, the Argentine referee had to send eight players off – four from each side including a substitute apiece – as the match descended into something resembling a mass brawl.

Afterwards, ESPN.com suggested that: “Gremio captain Pedro Geromel pointed out that Brazil is living a moment of polarisation where dialogue is becoming increasingly difficult. In this context, the players had given a dreadful example.”

His manager wasn’t quite so critical. “I am against violence and I told my players that too,” said Renato Portaluppi, who once had a brief spell in Serie A with Roma and who has won South America’s most prestigious club competition as both a player and manager with Gremio. “I always tell my team just to play football, but when the opponent starts fighting, I can’t expect them just to watch. My team is not made up of nuns.”

Legal Filing of the Week

Mmmm, let’s see now. This one might just go to the US Soccer Federation (USSF) whose lawyers responded last week to a case lodged by its women players who are claiming $66 million in damages for gender discrimination by simply arguing that they deserve less money because they are essentially inferior to their male counterparts.

Incredibly, this did not go down so well and by Thursday evening USSF President Carlos Cordeiro has resigned from his position as prominent board member, former male internationals and sponsors like Volkswagon, who described the position taken as “disgusting”, queued up to distance themselves from the claim.

The federation is expected to have different lawyers when the case comes to court in May.

Gesture of the Week

That would go to the Liverpool players who got onto to Labour MP and Liverpool supporter, Ian Byrne – one of the founders of Fans Supporting Foodbanks – the other day in order to donate an initial £40,000 after it became clear that the suspension of the Premier League would also mean no more match-day collections by the organisation for the foreseeable future.

“Jordan Henderson told me the players had seen our appeal and the players wanted to help,” said Byrne, a long-time trade union activist who was elected to parliament for the first time at the recent British general election. “They have committed to covering all of the shortfalls that we will incur as a result of not being able to hold our usual match-day collections.

It shows the kind of solidarity that are clearly going to need,” he added.

“No disrespect but f**k football clubs. People’s lives are more important. My mum is 88. We go around and see her every day. If she gets it and one of us has given it to her then you’ve got to live with that.” – Maidenhead United manager (and former West Ham midfielder) Alan Devonshire after calls for his side’s National League game against Stockport County to be postponed were rebuffed and around 1,600 people turned up to watch.

“Maybe I will cry a little bit.” – Wuhan Zall captain Yao Hanlin ponders the prospect of getting home to his wife and five-year-old son after six weeks of enforced exile in Spain after the city was closed while they were away at a training camp.

“I’ve spoken to young players – a lot of the stuff they are watching is freestylers, skills....they don’t actually watch the right stuff. I remember speaking to (then Arsenal player, Alex) Oxlade-Chamberlain in the England squad. I told him to come short, run off the ball. I said: ‘Go and watch Marc Overmars,’ and he didn’t know who Marc Overmars was.” – Wayne Rooney on kids these days.

“I think in respect of sporting events speculation about cancelling or postponing sporting events is very premature, we’re nowhere near that sort of stage. There is no reason for people either not to attend or to cancel them at this stage.” – British Culture Secretary Oliver Dowden reminding us once again just how short a time a week really is in politics.

“This will be remembered forever.” – Diego Simeone humbly reflects on his side’s Champions League win at Anfield.

121: The number of players, officials and staff in isolation at Juventus after it was announced on Wednesday that one of the club’s players, Daniele Rugani, had tested positive for Covid-19.

1 ‘Magnificent’ Conor Connelly remembered after sudden death
2 Billy Joe Saunders apologises for video of 'advice' on how to hit women
3 TV View: Mícheál Ó Muircheartaigh helping us all keep the faith
4 A beautiful, happy accident - Moneyball is the best sports movie ever
5 Reality Bites – Tales from the new normal: Caitríona Cormican
Real news has value SUBSCRIBE
Crossword Get access to over 6,000 interactive crosswords