United now need a point in Leipzig to secure qualification 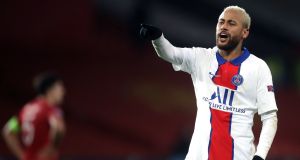 It was a Champions League thriller that had it all. Drama, red card controversy, chances at both ends, stunning individual interventions. But when the pulse rates had settled, Manchester United were left to consider a defeat that sets up a make-or-break final group tie at RB Leipzig next Tuesday for them. Paris Saint-Germain, the beaten finalists last season, remain alive and, even better, they are in control of their destiny.

It was a game that the French champions ought to have won several times before they did, after Marquinhos finished scruffily from close range for 2-1. Neymar, with his second goal of the tie, would gild the scoreline at the very end.

Yet, equally, they might have faced a deficit that could have proved too much for them. After Marcus Rashford had cancelled out Neymar’s first goal, United blew glorious chances for 2-1 at the start of the second half through Anthony Martial and Edinson Cavani, the former PSG striker.

Fred was the player dismissed for two bookable offences, although he should have seen red for the first one and nothing for the second and United now know that they need a point in Leipzig to progress.

It was only at the end of August that PSG had contested their first final in the competition, but they knew at kick-off time that their continued involvement hung by a thread. The jeopardy underscored the occasion, which was also heavy on glamour and recent history between the clubs. It felt like a classic match-up, with Old Trafford pristine beneath the lights, if eerily still.

Solskjær went for the security of Fred and Scott McTominay in central midfield but the plan was undermined when PSG sliced through his team to score the early goal. Kylian Mbappé drove in from the right flank before swapping passes with Neymar and showing quick feet to get around McTominay.

When Mbappé shot, the ball ricocheted off Victor Lindelof to break for Neymar to the right of goal. The angle was tight-ish but the Brazilian lashed the ball past David de Gea.

PSG were driven by revenge, not only for the defeat in October but also the dramatic away-goals exit at United’s hands in the last-16 of the 2018-19 competition. They were in the mood to hurt United and they might have scored again before the tie was 20 minutes old.

Alessandro Florenzi extended De Gea from range after a terrible clearance by Fred; Neymar stretched but could not reach a Florenzi cross and the Brazilian then worked De Gea with a hooked volley. The big chance, though, came when Mbappé led a break and combined with Neymar only to fail to play in Moise Kean.

United lived on their nerves and Fred summed up their jitters when he foolishly put himself in harm’s way of a red card on 21 minutes. Passions flared after Bruno Fernandes went down theatrically after a swipe by Danilo and Fred squared up to Leandro Paredes. They pressed their foreheads together before Fred thrust his own forward. Paredes crumpled to the ground.

Cue the referee, Daniele Orsato, being advised to review the incident on the pitchside monitor and it started badly from a PSG perspective when the Italian initially ran towards the wrong touchline.

In the end, he would be satisfied that a yellow card was sufficient punishment. It made no sense. And neither did Fred’s decision to stamp into a challenge on Paredes in the 37th minute. Risky did not begin to describe it. Paredes did not hold back, either, and he caught Fred to incur a booking.

By that time, United were level and it did not reflect the balance of the first-half. Although Rashford looked threatening, there was a lack of directness and poor final choices from his team. It took a huge deflection to get his team back into it. After Fernandes had won the ball, Anthony Martial drew a low save out of Keylor Navas and when Aaron Wan-Bissaka recycled the ball, Rashford shot low for the far corner. Danilo diverted the ball past Navas and inside the near post.

United recalibrated at the interval and they ought to have taken the lead on one of two breaks early in the second period. Edinson Cavani, the former PSG striker, was at the heart of both of them. It was his glorious flick that released Rashford and, when he crossed, Martial had to score. He lifted high. Then, Martial released Cavani, whose chip beat Navas only to come back off the crossbar. From the rebound, Fernandes teed up Martial. His shot was charged down by Marquinhos.

It was excellent entertainment with a spikey edge. Neymar had complained about being stamped on by McTominey at the end of the first half while Martial bloodied Marquinhos in an aerial challenge. PSG questioned Orsato’s control.

Back came PSG. Marquinhos headed off the top of the crossbar and De Gea saved brilliantly from the substitute, Mitchel Bakker, before Abdou Diallo smuggled a wild low shot from another substitute, Ander Herrera, across the six-yard line. Marquinhos took a touch and scored.

Solskjaer paid for his decision not to substitute Fred when the midfielder lunged into a challenge on Herrera. He got the ball first but Orsato made another erratic decision when he reached for a second yellow card. Fred had been lucky to last this long.

Did United have anything left? Paul Pogba, on as a substitute, clubbed a volley high from 20 yards and Fernandes headed at Navas. Mbappé should have added the third on the break. Neymar would get the job done. - Guardian