‘It didn’t work out but we don’t have time to dwell on it, we’ve a cup final at the weekend’ 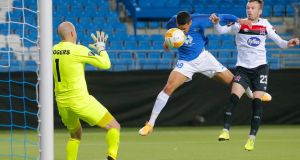 The talk around Tallaght yesterday morning was all about how much Dundalk will have been benefiting from their European group stage exploits.

Everyone, it seems, is happy for everyone else when there’s some fixture congestion involved, but it is somehow hard to imagine that Stephen Bradley and co would have been anxious to swap places with their rivals and have this game play a central part in their build-up to Sunday’s cup final.

The manner of the defeat will certainly not have done too much for the Irish side, who are clearly struggling to live with the demands of this level. But there was consolation very late on when a spell of pressure was rewarded in spectacular style by Jordan Flores, who found the top far corner from what must have been close to 30 yards. And to think, it wasn’t even close to being the midfielder’s best of the season.

The 94th-minute strike couldn’t change the complexion of things, though, with Dundalk well beaten as their manager again sought to juggle commitments on another night where all of his resources were clearly required.

His team selection certainly suggested that Filippo Giovagnoli was again going into a group game with his thoughts focused on matters at the weekend back in Ireland. Shane Keegan had spoken on Wednesday about there being a plan he believed might yield the team’s first point of the campaign, but the absence from the starting lineup of Michael Duffy or David McMillan, among others, suggested it might well have been the one labelled B.

There were six changes, in any case, from the side that put 11 past Athlone last Sunday and a similar number from the one that had started against the Norwegians in Tallaght. With Pat Hoban injured and McMillan rested, Nathan Oduwa and Daniel Kelly started together up front, and the intention seemed to be to defend in numbers then go a bit more direct towards the two strikers.

There were moments when you could see how it was intended to work out, with the pair having a hand in generating a few half chances. Molde, though, dominated more or less from start to finish and, with the hosts two up by the break, the outcome was never in the slightest doubt through the second period.

From the Irish side’s perspective, the real pity of it was the ease with which they handed their opponents goalscoring opportunities. Defensively, they were again too poor to get by at this level despite the number of bodies devoted to keeping Molde’s attackers at bay.

Corners were a persistent problem, with Magnus Wolff Eikrem able, it seemed, to find the head of a team-mate almost every time, but Molde repeatedly opened their opponents up from play too. Between the couple of better stops that Gary Rogers managed, some poor enough finishing and one or two enterprising attempts that simply didn’t come off, there might well have been more goals by the end.

Their first, to be fair, came just after Dundalk had what probably remained their best chance of the game until the injury-time goal, with Kelly completely unsettling the home side’s two central defenders but slightly overplaying the pass intended to put Oduwa clear into the area.

It seemed encouraging given the relative lack attacking action at that end of the pitch, but Molde immediately recovered the initiative, their goalkeeper playing the ball out to start a move which ended a minute or so later with Martin Ellingsen feeding Erling Knutzon, whose cross was turned home far too easily by Eikrem.

The second was painfully close to being a rerun of one of the goals conceded against Vienna last week, Ohi Omoijuanfo this time the one to watch a cross sail over the three centre-backs so that he could head home from the far post as a Dundalk wing-back scrambled too late to make some sort of challenge.

Marton Ellingsen’s third, midway through the second half, was even more straightforward, with another Eikrem corner just headed home from the far side of the six-yard box.

It was basic stuff and completely undid any of the better things the Irish side managed over the course of the night.

Sean Gannon acknowledged afterwards that the players had regarded the game, at least in part, as an opportunity to put themselves in the frame for Sunday.

“It didn’t work out for us,” he said, “but we don’t have time to dwell on it. We have a cup final to play at the weekend.”