Without a system there is no salvation for Ireland 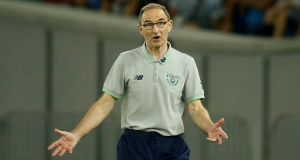 Martin O’Neill says the Serbs are technically better than Ireland but that his players will put their “heart and soul” into it. Photograph: David Mdzinarishvili/Reuters

We’ve all seen enough by now to know that Martin O’Neill doesn’t like having to do post-match interviews with RTÉ’s Tony O’Donoghue, but the Ireland manager surely has to accept that this is just part of the deal. A few hundred thousand viewers back in Ireland have to endure the game and in return O’Neill has to endure a short interview. Nobody gets to escape their share of suffering.

The latest awkward interview saw O’Neill claim that although he knew why his players kept giving the ball away in Tbilisi on Saturday night, there was “no point” in sharing this knowledge with O’Donoghue and, by extension, all the people watching on RTÉ who were wondering the same thing. “Why would I want to share it with you?”

O’Neill has, as he sometimes mentions, won two European Cups and maybe a football man of such stature feels it an intolerable indignity to have to discuss his tactics with O’Donoghue, whose trophy cabinet is bare. If so, it just goes to show that every manager is different, because Giovanni Trapattoni won three European Cups and he never seemed to have a problem with it.

A simpler but maybe more disturbing explanation is that O’Neill gets annoyed when he’s asked questions he can’t answer. Sure, he claimed that he had the answers, but if that really was so then the questions wouldn’t arise, because Ireland wouldn’t play the way they did against Georgia.

Watching Ireland get schooled by a team that had taken three points from their previous six qualifiers, it would be easy to look at the technical shortcomings of some Irish players and conclude, as Trapattoni did, that Ireland was really more of a rugby country.

But just because we don’t have any players who would get called up for Spain, Germany or Italy doesn’t mean that we can’t expect anything better than what we saw on Saturday night.

How much more evidence do we need that international football is about organisation far more than it is about individual quality? A team with a plan can go a long way, while even the best players can look terrible in a team that doesn’t know what it is supposed to be doing.

"I don't think there is a quick fix" - Martin O'Neill tells @CorkTOD how Ireland will focus on Serbia #RTEsoccer #GEOIRL pic.twitter.com/utsNa5LQ9D

England provide several good examples of this latter kind of team. Take the “Golden Generation” side that laboured to the quarter-finals of the 2006 World Cup before being knocked out on penalties by Portugal.

England’s exit – and their subsequent extraordinary failure even to qualify for Euro 2008 – was greeted with all the usual accusations of English players lacking the technical quality to compete. Yet if you look at the England team that lost to Portugal, nine of the 11 starters were Champions League winners with their clubs.

In fact, most of those players reached more than one Champions League final. At the European club level they were dominant, and yet for England they were appalling, because neither Sven-Goran Eriksson nor his successor Steve McClaren had any idea of how they wanted their team to play.

The opposite of England would be their conquerors at Euro 2016, Iceland. They also don’t have any players who would make Spain’s squad, but they show what is possible when a side has a game plan tailored to its strengths. In the same tournament we saw Wales and the eventual winners, Portugal, prove that smaller countries can overcome more talented opposition with intelligent system football.

Watching Ireland play on Saturday it was difficult to discern any evidence of a system. It looked as though they were still trying to knock it long for Niall Quinn to flick it on for Robbie Keane, except Niall Quinn wasn’t there, Robbie Keane wasn’t there, and Ireland weren’t even playing the second striker that could have made a long-ball game viable.

Harry Arter and Robbie Brady were disappointing in midfield but that’s because we still hope for better things from them. After 82 caps we are so familiar with what to expect from Glenn Whelan that his performances no longer qualify as disappointing. As ever he offered no support in attack, but still managed to leave pockets of space in behind for the opposition to exploit, as Georgia did for their goal.

Last week Roy Keane offered Whelan qualified praise by portraying him as the sort of footballer whose subtle qualities are only really appreciated by other football men: “He doesn’t fall into the media spin, he doesn’t wear fancy-coloured boots and people pick up on that.” Keane also suggested that the constant calls for Wes Hoolahan to be in the team were “media spin”.

It would probably be more media spin to note that Whelan was absent from all those wins except the opening 22 minutes in Vienna, yet Ireland somehow managed to cope with the loss of the defensive midfield talisman and keep three clean sheets. But these are the kinds of mysteries that puzzle journalists and fans – the sort of people who don’t really understand the game – and this is why we sometimes need the real football men to condescend to explain their thinking.

Ireland can get away with what happened in Tbilisi if they beat Serbia on Tuesday. O’Neill says the Serbs are technically better than Ireland but that his players will put their “heart and soul” into it.

Serbs have hearts and souls too of course. Nobody disputes that the Serbs have superior skills, Irish fans now expect that of every opposing team. The worrying thing is that Serbia also seem to have a clearer idea of what they are trying to do on the field, and that’s why it’s hard to have much confidence in Ireland’s chances.