Consensus exists to see season completed but if it is curtailed, relegation the chief issue 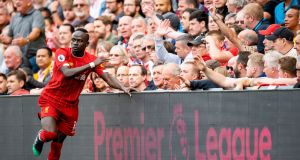 Sadio Mane: has enjoyed an excellent campaign to help put Liverpool out in front at the top of the Premier League. Photograph: Peter Powell/EPA

This is the big one, the likely source of most friction. There is a strong will among the clubs to complete the season but what if factors beyond anybody’s control make that impossible?

How to determine the final standings and, most contentiously, rule on relegation? A contingency plan must be put in place. The Premier League favours an unweighted points-per-game model but however it is decided, it will be a brutally hard way to go down – if it comes to it.

There is a lobby for relegation to be scrapped, driven principally by the clubs in peril, but it is difficult to see how that could happen. The FA has made it clear that it is against voiding relegation, while the notion would be at odds with existing agreements with the Football League and broadcasters.

There was frustration when the clubs were told they would lose between £300m and £350m in broadcast revenues even if they were able to finish the season. This was because they would not be able to fulfil certain contractual obligations in terms of the delivery of the product.

There had been suggestions that the figure could be negotiable but it is not and the final bill will be £330m – with additional penalties of £35m per week after 25-26th July if there are further delays. It will be repaid in instalments over the next two years and remains preferable to the loss of £762m, which would be demanded if the season were to be curtailed.

The clubs will be asked to sign off on proposals to enhance broadcaster access on matchdays – features such as a camera and microphone to capture the coin toss and a camera in the tunnel. Dressing-room cameras and half-time interviews appear to be off the table.

This is the umbrella term for problems such as squad registrations and player contracts. The clubs will discuss and vote on whether to allow the return of players who were injured in January and omitted from the 25-man lists – this would most likely involve an increase to the squad size limits.

An example is Newcastle’s Paul Dummett, who damaged a hamstring on January 11th and was left off the list but is now fit again.

“The manager and the club are hopeful that the rules will be relaxed and changed,” Dummett said.

What will not be allowed is the inclusion of returning loanees, or summer signings such as Chelsea’s Hakim Ziyech. Clubs have been given until June 23rd to agree extensions with players whose contracts expire on June 30th.

With so many games to be crammed into a short period and after such a long break, there are worries over whether the players will be able to handle the physical demands. Hence the proposal to extend the number of permitted substitutions to five and a push, led by Chelsea, to increase the number of players on the bench to nine. This will be voted on, with some of the smaller clubs worried it could offer an advantage to those with deeper reserves.

The preferred framework for the remaining league matches was agreed by the clubs last Thursday. In broad terms, they want to use six weekends and three midweeks to get the season finished by July 25-26th. This does not include Manchester City v Arsenal and Aston Villa v Sheffield United on June 17th, which will be the reopening night.

The league’s football operations team have tried to allocate matches to specific dates, bearing in mind that the various slots are to be spread across each week, with action every day, and also attempting to factor in the interests of broadcasters and safety advisory groups.

The priority has been to respect the guidance that teams should not play twice in 48 hours. It has been difficult and there are sure to be complaints – but the hope is that the schedule will be signed off.

This item has felt like a constant for weeks. At one point it seemed like a prerequisite to the season resuming, with police worried about fans turning up outside their clubs’ grounds and resources being stretched.

Then it faded from the agenda before returning to take in a small number of high-risk games. It will be raised once more, although the preference of the clubs is clear: they want to finish the season playing home and away.

It should be noted that the final decision on venues is not theirs to make, but rather local authorities in conjunction with safety advisory groups. Some club executives think neutral grounds ought to remain as a contingency option.