Guideline of four seats between each person is largely ignored among 10,000 supporters 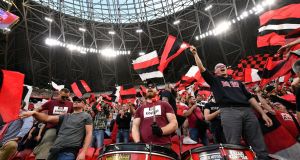 With chanting, drums and some very loosely enforced social distancing regulations, the Hungarian cup final on Wednesday evening almost felt like a normal football match. The game, which Budapest club Honvéd won 2-1 against underdogs Mezokovesd, was the first big game in Europe to be played in front of paying spectators since coronavirus led to the suspension of live sport across most of the world in March.

Roughly 10,000 fans were allowed into the 65,000-seater Puskás Arena for the match, and while social distancing regulations meant spectators had to sit four seats apart from each other, hardcore fans ignored their ticket numbers to gather behind the two goals. At the whistle, hundreds of Honved fans jumped and cheered in close proximity, in scenes that may prove controversial if there is any spike in the country’s coronavirus case numbers in coming weeks.

Although other large public gatherings are still banned, fans have been allowed into stadiums for football games since the weekend, with a number of league games going ahead in front of small crowds prior to Wednesday’s cup final.

Hungary’s nationalist prime minister Viktor Orbán has a football obsession, and has funded stadiums and football academies across the country, most notably in his home village of Felcsút, where the state-of-the-art stadium has more seats than the population of the village.

When the regulations were announced, there were plenty of jokes that Hungary’s clubs had long adhered to the social distancing rules inside the country’s grounds, given the habitual low attendances. While Ferencvaros, the country’s biggest club, draws bigger crowds, the nationwide average attendance for top-flight games last season was around 3,000.

However, tickets for Wednesday’s game proved popular. The lower section of seating sold out quickly, prompting authorities to open up the middle tier as well. Tickets started at just 1,500 forint (£3.87), an attractive price for fans starved of live sport over the past three months.

“Even though only one eighth of the stadium was full, the atmosphere was brilliant,” said Márton Réti, a 38-year-old Honvéd fan who attended the game. He went with three friends who supported other clubs and agreed to join as they were excited to see a match live again. “I’ve never been served a beer in a big stadium so quickly before,” he said.

The rules put in place for games since the weekend have stipulated temperature checks outside the stadium, compulsory wearing of masks, and keeping a distance of four seats between spectators, but many fans quickly forgot about the regulation once inside the stadium.

The sparkling new Puskás Arena was completed last autumn and inaugurated with a game between Hungary and Uruguay in November. It was meant to host a number of Euro 2020 games this month. The tournament has now been postponed to next summer.

As of Wednesday, Hungary has confirmed 3,391 cases of coronavirus with 1,207 still active, and there have been 534 deaths of Covid patients. The country implemented an early lockdown and avoided the larger death tolls seen elsewhere in Europe.

In recent weeks, life in the country has been getting back to normal, with shops and restaurants reopening, but there are still strict travel restrictions in place and a ban on entrance for everyone but citizens and permanent residents of the country.

Elsewhere in Europe where leagues have resumed or are planning to do so soon, games are being played behind closed doors. Poland’s prime minister has said fans will be able to attend league games in the country from June 19th, provided at least three-quarters of seats remain empty. – Guardian