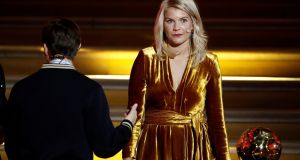 Luka Modric ended a decade of dominance by Lionel Messi and Cristiano Ronaldo in the Ballon d’Or but the Croatian’s win was overshadowed when the inaugural winner of the women’s award, Ada Hegerberg, was asked to twerk live on stage by the host DJ, Martin Solveig.

Hegerberg, who helped Lyon to the French title and Champions League, scoring in the final, pipped Denmark’s Pernille Harder to the prize but appeared embarrassed when asked by Solveig if she wanted to dance in celebration and “knew how to twerk”.

The 23-year-old said “no” and seemed to attempt to leave the stage, before reluctantly agreeing to dance to another song with Ginola. Solveig tweeted shortly after the ceremony, saying he had apologised to Hegerberg for the remark.

“I explained to [ADA]and she told me she understood it was a joke,” Solveig wrote. “Nevertheless, my apologies to anyone who may have been offended. Most importantly, congratulations to Ada.”

“He came to me afterwards and was really sad that it went that way,” The Norwegian forward said. “I didn’t really consider it sexual harassment or anything in the moment. I was just happy to do the dance and win the Ballon d’Or.”

Hegerberg added she was extremely proud to be named the first female winner. “It’s incredible,” she said. “This is a great motivation to continue working hard and we will continue to work together to win more titles. I wanted to end with some words for young girls around the world: believe in yourselves.”

Andy Murray was among those on social media who criticised Solveig’s comment, calling it “another example of the ridiculous sexism in sport.”

“What questions did they ask Mbappé and Modric?” the British tennis player added on Instagram. “I’d imagine something to do with football. And to everyone who thinks I’m overreacting and it was just a joke ... it wasn’t. I’ve been involved in sport my whole life and the level of sexism is unreal.”

Modric won a third straight Champions League title and inspired his country to reach the World Cup final, and there are few who will begrudge his victory, with Ronaldo in second. Lionel Messi only came fifth, finishing behind France duo Antoine Griezmann and Kylian Mbappé – the first time since 2006 that the Argentina forward has not finished in the top three.

There had been a clue that there would be a new winner in the 63rd edition of this award - Blackpool’s Stanley Matthews was the first in 1956 - when neither Ronaldo nor Messi were present at the Grand Palais in Paris, although in typically humble fashion Modric admitted he had been pleasantly surprised to be recognised after being congratulated on his victory by Croatia president Kolinda Grabar-Kitarovic.

Having become the first teenager to score in the World Cup final since Pele in 1958 as France won their second title in Russia, Paris Saint-Germain’s forward Mbappé was the runaway winner of the inaugural Kopa Trophy for the best player under the age of 21 ahead of Liverpool’s Trent Alexander-Arnold. Mohamed Salah finished in sixth place in the men’s award in recognition of his fantastic debut season at Anfield that saw him score 32 Premier League goals.

Salah was the highest-ranked player from the Premier League, with Chelsea’s Eden Hazard eighth, Kevin De Bruyne of Manchester City ninth and Tottenham’s Harry Kane – who won the Golden Boot in Russia – 10th.