Originally drawn in Group C alongside the Netherlands and Germany, Mick McCarthy’s side were moved to Group D as no more than two host nations can play in the same group. Video: Euro 2020 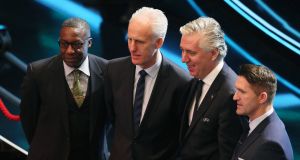 Ireland’s fate should ultimately come down to the team’s ability to actually beat Switzerland or Denmark but Mick McCarthy may take some comfort from the prospect of having put points on the board before his side take on either of their main Euro 2020 qualification rivals next year.

His team will play Gibraltar and Georgia in their opening group games in March with both viewed as highly winnable games, the first away, the second back in Dublin. It provides opportunities for the returning manager to bed himself back in before the tougher tests begin.

The first of those will be the return to Denmark, almost certainly Copenhagen, on June 7th immediately after which the Irish be at home to Gibraltar. The schedule offers the prospect of having a healthy tally of points secured before the summer break although inevitably it means a tough run-in with top seeds Switzerland to be faced twice in six weeks before a solitary, potentially another do-or-die encounter against the Danes on Monday, November 18th at the Aviva.

Speaking before the fixtures had been finalised, McCarthy recalled how draws away to Holland and Portugal had helped put his side on the road to qualification for the 2002 World Cup.

But asked whether having a couple of dates available for friendlies as a result of Ireland ending up in one of the five-team groups this time might help his cause, he considered an alternative scenario.

The message was that momentum would become key and that seems bound to be the case if, as would be expected if the team is going to challenge at all, Ireland do take six points from their opening two outings.

The team was not handed the most straightforward of paths to the finals at the Convention Centre in Dublin on Sunday but there was plenty of perspective provided by having initially been drawn in a group with the Netherlands and Germany.

Uefa’s limit of two from 12 host nations for the finals per qualification group, intended to prevent too many failing to make it through, saved one Ireland from that fate as McCarthy’s men were bumped from Group C to D.

However Northern Ireland promptly found itself on the receiving end as Michael O’Neill and Co were drawn next and so found themselves filling the vacancy that had just been created.

O’Neill described it all as “cruel,” but insisted that he still believes his side can challenge for a top-two spot.

“We are going against two real powerhouses of European football,” he said. “People say that this Germany aren’t that strong but funnily enough I don’t actually believe that myself.

“It will take two of the biggest results in Northern Ireland history, to be honest, but of course we have to aspire to doing that and we believe that we can do that.

“I think over the last four years we have proven ourselves to be able to play top tier and second tier European nations,” continued the manager, whose side will play all four of their games against Belarus and Estonia in March and June before facing into a rather more daunting autumn schedule.

“Now we have to go in against two top tier ones to be honest and that’s the challenge. If you don’t believe you can do it then there’s no point really.”

Moments later, a few feet away, McCarthy acknowledged the stroke of good fortune but cautioned too against anyone getting carried away.

“I think there was a collective sigh of relief but I think it was a bit premature when you’re looking at Switzerland and Denmark in the group,” he said.

“It’s hardly made it easy. It’s still two good sides we’ve got in our group and I think Georgia was the hardest one out of the fourth pot as well.”

He is, at least, relieved to be able to focus on an identifiable task in hand. He and his assistant, Terry Connor, had hit the ground the running this week, he said, in terms of games they had seen but now there will be the opportunity too to start doing some homework on Ireland’s opponents.

McCarthy spoke briefly about this first week he has had back in the job and listed Jack O’Connell, the 24-year-old Sheffield United defender, among the players he had gone to see in action.

A current international who had played with him at Brentford had previously dismissed the suggestion that he might qualify for us but the FAI now believes that he might and the matter is being pursued.

The FAI’s more immediate concern will be obtaining confirmation from Gibraltar where the federation intends to play their game in March. Both their coach, Julio Cesar, and press officer said the association’s preference is to stage the game there, in the 2,300 capacity Victoria stadium, rather than in the much larger Estadio Algarve where Ireland played in September 2015.

But the size of the venue and resulting entitlement of the visiting federation to just a couple of hundred tickets would spark a major scramble and rekindle tensions over the FAI’s controversial system of distribution.

That, though, was a long way from McCarthy’s mind as he declared himself optimistic about his side’s prospects.

“I’m always optimistic about getting into the top two,” he said, “and I go back to when we qualified with Holland and Portugal. We were written off, both games away, no chance and I’d be coming home and I’d be out of a job but that didn’t happen and we ended up in the World Cup in 2002. I’m looking to do exactly the same now.”