All in the Game: Ever wondered how Lionel Messi pees?

Meanwhile Jack Wilshere gets confused by his age, word of mouth and much more 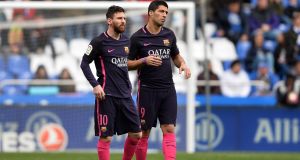 Interview of the Week: That’d be the one done with Lionel Messi and Luis Suarez on Uruguayan TV station Canal 10. If you had those two maestros in for a chat, what would you ask them? Um…..

Interviewer: “Do you sit or stand when you pee?”

Interviewer: “But it splashes back at you!”

Interviewer: “Do you also pee sitting down in the changing room?”

Messi: “No, you can’t, there’s just a urinal to pee standing up. But you can always lock yourself in the toilet.”

Interviewer: “Yes but if you lock yourself in there, everyone will suspect you’re having a poo.”

And the 2017 Woodward and Bernstein award goes to…

How to really stanp out foul play

After picking up a five match ban for his stamp on Zlatan Ibrahimovic, Bournemouth’s Tyrone Mings had a fairly succinct response to the news that the Swede’s Manchester United pal Marcos Rojo would receive no punishment at all for his stamp on Chelsea’s Eden Hazard in last Monday’s FA Cup game. His response? “LOL.”

Both of them should spare a thought for Shanghai Shenhua’s Qin Sheng after his punishment for stamping on Axel Witsel in a recent Super League game - meted out by his own club. He has been fined the equivalent of €40,000, threatened with his entire salary being withheld for the rest of the season, relegated to the reserves where he has been told he will “rot” for the remaining four years of his contract if his behaviour doesn’t improve, and has been told that any transfer request submitted by him will be rejected.

“The extremely irrational behaviour of Qin Sheng has severely tarnished the image of this club, the football of Shanghai and even Chinese football,” said club president Wu Xiaohui. “All the efforts made by others have gone down the drain because of him.”

The moral of the story? Tread carefully.

Quote of this or any other week, from David Hill’s ‘Said and Done’ in the Observer: “Dude, what happened, happened. I made a mistake, a serious one, but mistakes happens in life – I’m not a bad guy. People tried to bury my dream because of one mistake, but I asked God for forgiveness, so I’m carrying on with my career, dude. I’m starting over.”

That’d be Brazilian goalkeeper Bruno Fernandes who has just been signed by third division Boa Esporte after being released from jail having served seven years of a 22-year jail sentence for murdering his ex-girlfriend and feeding her body to dogs so he could avoid child support payments.

Be careful what you say...

The ‘He’s Got Some Explaining To Do When He Gets Home’ gong of the week: It goes to Free State Stars’ Mohammed Anas who won the man of the match award after scoring twice in the 2-2 draw away to Ajax Cape Town in South Africa’s Premier Division. As spotted by African football reporter Gary Al-Smith, Anas during his post-match chat:

24,500: That’s how many of the 66,000 tickets for this year’s Champions League final in Cardiff have been allocated to sponsors, officials and corporate hospitality by Uefa. Sadly, their ‘Super Platinum’ tickets are sold out – and they were only €6,800 each. Truly, it’s the people’s game.

If the Palermo faithful thought life might be dull now that Maurizio Zamparini has been replaced as president by Paul Baccaglini, they were entirely wrong. Putting Gary Lineker and his pledges in the ha’penny place, Baccaglini has made the following vow in the event of the club avoiding relegation.

From Football-italia.net: “We’ve got a Plan A for remaining in Serie A and a Plan B in case of relegation. It’s important to create a winning mentality. I already promised to do all sorts of things if we stay in Serie A, like walk to the Church on my knees, eat 20 sandwiches with milza, get a tattoo on my face – I’ll do all of it. I’m a man of my word!”

What, you ask nervously, is ‘milza’? According to Wikipedia it’s a Sicilian street food consisting of bread flavoured with sesame, stuffed with chopped veal’s lung and spleen that have been boiled and then fried in lard.

Pray for Paul that Palermo go down.

“I used to live in Zimbabwe and I’ve watched Robert Mugabe ruin the country - and Wenger is doing the same. He’s the Mugabe of Arsenal.”

An Arsenal fan in a video that did the rounds last week putting it all in, eh, perspective.

“I actually signed a contract with Metallist Kharkiv in Ukraine after leaving Hamburg but the civil war started. Maybe I would have been better going into the civil war than going to Sunderland.”

Newly appointed Celtic head of recruitment Lee Congerton on the joys of his previous job.

”Don’t speak to me about Liverpool, please. There was a team with great people, fantastic fans, but the place…”.

“The main problems for Tevez is language and food. Same as me, he can’t speak Chinese and he needs a translator all the time. He hasn’t tried any Chinese food yet. He needs a lot of time to adapt to Chinese food.”

Shanghai Shenhua coach Gus Poyet explaining why €750,000-a-week Carlos Tevez is struggling in China, even a Chicken Chow Mein is a mystery to him.

“I get the feeling that Arsene most probably wants to be carried out in a box because that is the way he is…I think he wants to manage for another five or six years by the sounds of it.”

West Brom gaffer Tony Pulis on how tricky it might be for Arsenal to persuade Wenger to move on.

”It’s not Paul’s fault that he gets 10 times the money that some players did in the past. It is not his fault that some of the pundits are in real trouble with their lives and they need every coin to survive and Paul is a multi-millionaire.”

Jose Mourinho explaining why the pundits are being mean about Pogba, as only Jose can.

“I’ve never heard so much rubbish in my life. Why do we have to listen to that garbage? I’m sick to death of him.”

Roy Keane on Jose’s complaints about fixture congestion and fatigue. This one could run and run…

Jermain Defoe on not bothering to read a text message from a name with which he was not familiar. (Aka Mr Southgate who was offering him a place in the England squad. Morto.)