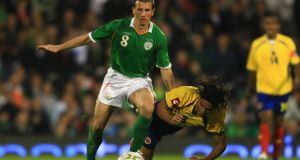 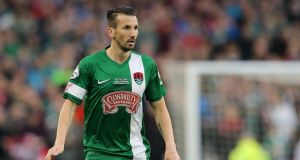 Miller, a Cork native, was reported to have the disease last November.

He had been playing in the American third-tier United Soccer League for Wilmington Hammerheads, having first made his name in Martin O’Neill’s Celtic team in 2004.

His promising form there earned him a transfer to Manchester United, before spells at Leeds, Sunderland, QPR, Hibernian, Cork City and in Australia.

Miller has 21 senior international caps, and one goal, for the Republic of Ireland.

He had reportedly undergone chemotherapy after having initial treatment in the US.

Cork Schoolboys League tweeted the news, saying: “We have received the very sad news that Liam Miller has passed away tonight. The thoughts and prayers of everyone in the CSL are with Liam’s family tonight.”

Later, Miller’s friend Tam McManus confirmed it with the tweet: “I’m afraid it is true that Liam Miller has sadly passed away today. Thoughts are with all his family and friends at this horrendous time. So sad.”

The Cork native earned 21 caps for Ireland, scoring one goal. At club level he started his career with Celtic before securing a move to Manchester United in 2004 where he made nine appearances under Alex Ferguson while also appearing on loan for Leeds and then moving permanently to Sunderland.

It was there that he played under Roy Keane in the 2006 Championship-winning side before going on to play for QPR and Hibernian in the UK.

From there he made the move to Australia where he lined out for Perth Glory, Brisbane Roar and Melbourne City before returning to his native Cork City in 2015. A year later he made the move to the US where he was playing up until he was diagnosed with pancreatic cancer.

Last year Ireland manager Martin O’Neill commented on the news shortly after it had emerged that Miller was ill.

“I gave him his debut and he played wonderfully well in a Champions League game one evening, he was absolutely outstanding,” O’Neill said.

“The news, we heard about it just recently, we didn’t know how bad it was. All our thoughts go out to them. A very young man, 36 years of age, it puts things in perspective anyway.”

Tributes were pouring in on social media on Friday night with Hibs tweeting: “We are incredibly saddened to hear of the passing of former Hibernian midfielder Liam Miller. Our thoughts are with his family and friends at this time.”

Former Ireland teammate Clinton Morrison said: “RIP Liam Miller was a honour to play with you such a good footballer and a great guy as well such sad news thoughts go out to his family at this sad time.”

Miller’s first club Celtic tweeted: Celtic tweeted: “Everyone at #CelticFC is deeply saddened to hear of the passing of former midfielder Liam Miller. Our thoughts and prayers are with his family and friends at this time. RIP Liam, YNWA.”

Minster for Sport Shane Ross paid tribute to Miller and said his thoughts were with his family.

“Liam was so young and it is devastating for his family, friends and colleagues to have lost him so early in life. Liam was full of courage on and off the field, and we can see from the emotional tributes that he gave joy and inspiration to so many,” he said.

“He was a magnificent role model who will be sorely missed. Our deepest condolences to his wife Clare, children, Kory, Leo and Belle, his extended family and friends at this tragic time.”

United, City and Everton all run out big winners to make quarter-finals 21:57
‘A real coup’: Villa sign Barkley on season’s loan from Chelsea 21:06
Mikel Arteta: Liverpool are at ‘the level we have to reach’ 21:04
Premier League clubs spend more than £1bn during transfer window 21:12
Newcastle survive almighty scare before seeing off Newport County 20:12