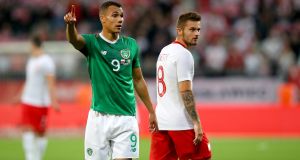 Graham Burke has joined Gillingham on loan from Preston until the end of the season. Photograph: Ryan Byrne/Inpho

Republic of Ireland forward Graham Burke has dropped down an English division to join Gillingham in the hope of kick-starting his second stint away.

The Dubliner only moved to Preston in the summer but after scoring twice in his first three appearances, he gradually drifted towards the margins at Deepdale.

An injury crisis at the Championship club helped him to regain his place in the starting line-up after Christmas but the return to fitness of rivals and the arrival a couple of new signings meant he found himself out in the cold with little prospect of Alex Neil recalling him anytime soon.

He heads to Gillingham until the end of the season in the hope of helping a club currently just one point above the League One relegation zone to avoid the drop. “I want to play, I want to score goals and will be doing everything I can to help the club move up the table,” said the former Shamrock Rovers player.

Burke’s fellow Irish international, Scott Hogan has escaped an even more difficult situation at Aston Villa by joining promotion chasing Sheffield United, also until the end of the season. The 26-year-old has struggled ever since his move from Brentford two years ago and has just 68 minutes of Championship football – all from the bench – and one FA Cup start to his name this season.

United boss Chris Wilder tried to buy Hogan in the summer when Villa seemed disinclined to let him go but the United manager has now succeeded in adding him to an attack that also includes the in-form David McGoldrick.

“I’ve made no secret of my admiration for Scott,” said Wilder. “He’s been a bit unfortunate at Aston Villa but he’s a really good fit for us. He’s something different to what we’ve already got and his goalscoring record is good. We believe we’ll create chances for him, but it’s his all-round general play and desire to kick-start his career again that appeals to us.”

David Meyler has joined Coventry in League One until the end of the season on loan from Reading.

“We are delighted to add a player of David’s pedigree,” said Coventry boss Mark Robins of the 29-year-old Corkman. “He’s a tireless, hard-working player and has great experience of playing at the highest levels of English football. He wil be a real presence for us on and off the pitch.”

Former Dundalk frontman David McMillan has joined Hamilton Academical until the end of the season. The club is marginally the best placed of three trying to avoid an automatic relegation and playoff place but has the Scottish Premiership’s worst goalscoring record.

Shane McLoughlin has left Ipswich for AFC Wimbledon on a permanent deal and 19-year-old Aaron Connolly has signed a new three-and-a-half year contract with Brighton, who have sent the teenager out on loan to Luton Town.

James McCarthy’s hopes of getting some first-team football on loan from Everton were fading as the deadline loomed.

The Ireland international midfielder was in Crystal Palace’s sights but the Eagles’ short-term deal for Chelsea striker Michy Batshuayi filled up their quota of loan signings.