Championship Review: Sharp earns Blades a draw at Norwich; Martin O’Neill off the mark with Forest 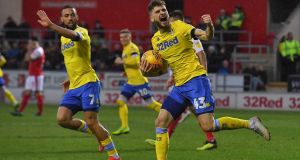 Mateusz Klich bagged a second-half brace as Leeds extended their lead at the top of the Championship to three points after coming from behind to edge out Rotherham 2-1.

Marcelo Bielsa’s men had faltered in their promotion push recently with three defeats in their previous four outings and the omens did not good when they fell behind to Semi Ajayi’s thunderbolt.

The defender thumped home from 25 yards out after 28 minutes as the Millers went in at half-time with a slender advantage.

Klich equalised six minutes after the restart, converting from close range, and then had a decisive say in the closing stages.

Their mood would have been further improved after Norwich twice surrendered a one-goal lead to draw at home to Sheffield United.

The Canaries went ahead after 11 minutes when Onel Hernandez calmly finished between the legs of visiting goalkeeper Dean Henderson, but the Blades drew level on the stroke of half-time through Billy Sharp’s penalty after Ireland full back Enda Stevens was fouled in the area.

Teemu Pukki restored Norwich’s lead when he flicked beyond Henderson before the hour, but Sharp bagged his 19th of the season when he headed home in the 79th minute.

Blackburn leapfrogged Hull and moved to within three points of the top six after a comprehensive 3-0 victory at Ewood Park.

The Tigers have been on a hot streak of late with seven wins and three draws in their last 10 Championship fixtures, but goals from Adam Armstrong and Jack Rodwell in the 10th and 18th minutes respectively put Blackburn in control.

Harrison Reed got on the score-sheet a quarter of an hour from time to hand their opponents a first league defeat since November 24th.

Abraham opened the scoring after just six minutes and then doubled their lead from the penalty spot just after the hour following Alan Judge’s foul on John McGinn.

Freddie Sears struck after 76 minutes to set up a grandstand finish but Villa held on.

Joe Lolley opened the scoring in the 19th minute and, although that was cancelled out by Josh Windass just after the half hour, Matty Cash restored Forest’s lead just after the resumption.