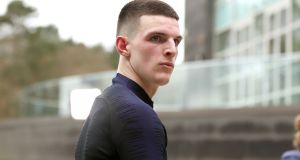 Declan Rice: “As you can hear, I am English. It was really good playing for Ireland. Now I’m just looking forward to the future and putting on an English shirt.” Photograph: Martin Rickett/PA

“I think the Irish are going through a major image change. I mean, the old image of leprechauns, shamrock, Guinness, horses running through council estates, toothless simpletons, people with eyebrows on their cheeks, badly tarmaced drives – in this country, men in platform shoes being arrested for bombings, lots of rocks and, eh Beamish: I think people are saying: yes, there’s more to Ireland than this. Good slogan for the tourist board! ‘Yes. Dere’s more to Oirland dan dis’.” – Alan Partridge.

Shortly before a Republic of Ireland international, a headline appeared in the London Independent trumpeting: ‘If Mick McCarthy is English because he was born here, then Cliff Richards is Indian and the Duke of Wellington is Irish’.

The length of the headline hints at the date in question: no media organisation could afford the news sheet for such a lavish headline nowadays.

It ran in December 1995, just three days before Ireland lost 2-0 to Holland at Anfield, bringing the Jack Charlton era to a boozy and bedraggled end in the most sentimental city of them all. And it ran some three years before Declan Rice was born.

England’s newest prospect finds himself at the epicentre of a bizarre week in which Republican anthems and iconography have been star-crossed in the worlds of comedy, international football and boxing.

Steve Coogan’s turn as Republican farmer Martin Brennan, lustily singing a Wolfe Tones republican come-all-ye on a fictional BBC chat show, has at once been hailed as genius for, in the space of two minutes, demythologising the archetype of the tedious republican bigot.

The Belfast boxer Michael Conlan drew criticism in the North for walking out to the Wolfe Tones’ Celtic Symphony for his fight in Madison Square Garden on St Patrick’s Night.

The Irish comedian Tommy Tiernan had been the subject of complaints to the PSNI after a series of jokes about Unionism and Arlene Foster apparently upset some of those in the audience.

Declan Rice, meanwhile, was forced to apologise after a social media message he posted as a little-noticed 16-year-old were recirculated. Rice was in touch with an Irish U-17 team mate anticipating their 2015 campaign. It read: ‘UP THE RA. Wait til we draw England’.

If Rice didn’t already understand the nuances of his English-Irish heritage and identity, than he does now. Thanks to the emergence of his message, which surfaced, as England manager Gareth Southgate noted, with a timing that is ‘uncanny’, Rice finds himself in the unhappy situation of being possibly targeted by sections of the England football supporters having already alienated vast sections of the Irish football support by deciding against playing at senior level for the Republic.

Inevitably, he’s been forced to clarify that his message was not meant as a political statement and to offer contrite assurances that they do not represent who he is. If the private messages of every teenage boy were made public, you can bet Rice’s words would belong in the mild-to-lame category.

If anything, they offer a glimpse into the uncertainty of a youngster born and raised in England, already beginning to excel in English football culture but trying to reassure himself and his teammates of his bone fides in an Irish dressing room.

It sounds silly and juvenile, much like the chanting of the Irish crowd in Madison Square garden, too buzzed and safe and entitled to stop to consider what they were actually chanting when they sang Ooh Aah Up the Ra. In the darkness of a boozy auditorium in a city that has been transformed into a lachrymose Glocca Morra, it’s easy to be a patriot.

Rice’s situation was made more acute by his appearance on an English FA in-house video ‘interview’, in which he describes the England call up as “probably one of the best feelings you are ever going to feel” before turning solemn as he is asked about choosing England over Ireland.

It was the first time we would get to hear him speaking ‘freely’ about his dilemma: Kitchener pointing his finger and stating plainly: Your country needs you - and Rice seemingly uncertain as to where his country was.

“As you can hear, I am English,” he says, alluding to his impeccably English accent. “It was really good playing for Ireland. Now I’m just looking forward to the future and putting on an English shirt.”

There was virtually nothing that Rice could have said at that moment without provoking the outrage of the significant number of Irish supporters who regard his allegiance to England as an unforgivable betrayal of everything they have so passionately drank and sung for.

But of all the things said by Rice and about Rice during the prolonged and incredibly boring saga, those few sentences were the most sensible.

He is English. It probably was ‘good’ playing for Ireland: trips with lads he liked; wearing the shirt of his ancestral homeland. And yes, you can absolutely bet he can’t wait to play for England, in Wembley, under Gareth Southgate and perhaps deliver on the potential that has had managers like Jurgen Klopp purring. All of those simultaneous emotions are possible.

Rice’s genuine thoughts and reasoning on going for England won’t be made public until the distant day when it is time to write his memoir – unless, of course, he’s made the mistake of messaging them to a mate.

But it’s reasonable to guess that whenever he elaborates on the matter, he will admit to finding the intense expectation heaped upon him by hopeful Irish fans and commentators a bit claustrophobic.

He couldn’t but have been aware that Martin O’Neill, during the ragged closing phase as Irish manager, answered about a million questions on Rice. He couldn’t have but been aware of the chorus of former Republic of Ireland players insistent that Rice shouldn’t have a choice to make.

But unlike them, he did have that choice and he had to make it an age when many of his peers are worrying about CAO choices or J1 summers. The eagerness for him to commit made Irish football appear needy and oversensitive and kind of desperate. If Rice found all that a turn-off, little wonder.

The proper beginning of the second coming of Mick McCarthy, Barnsley-born and Irish by choice and instinct, will put some welcome distance between the Republic of Ireland and what might have been with Declan Rice.

When McCarthy was playing for the Republic during the dramatic successes of the Charlton era, a squad peppered with regional English accents was sometimes derisively referred to as ‘England B’, filled with cast offs. Nobody minded. It made winning against them all the sweeter.

If Rice wasn’t quite so promising at football, he would never have been confronted with the choice and would probably have become an Irish football folk hero: a son of the soil returned.

It remains to be seen how England materialises for him.

But he’s the one who got away.

And that shouldn’t be such big a deal here.

1 Champions Cup draw: Connacht drawn with Pat Lam’s Bristol and Simon Zebo’s Racing
2 Gordon D'Arcy: Ireland must go after victory by frightening France into mistakes
3 Henshaw the only change as Andy Farrell names Ireland team for Paris
4 Cian Healy: ‘Realistically I got away with murder when I was younger’
5 Giovagnoli’s appointment at Dundalk ‘a great story’ says Arsenal boss Arteta
Real news has value SUBSCRIBE
Crossword Get access to over 6,000 interactive crosswords