Memories of former clashes, including the 1974 final, will ensure a tense Euro 2020 qualifier 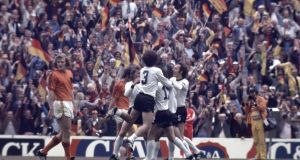 Gerd Muller (hidden) is surrounded by his team-mates after scoring the winning goal for West Germany against the Netherlands during the 1974 World Cup final at the Olympic Stadium in Munich. Photograph: Paul Popper/Popperfoto/Getty Images

It doesn’t fit into our stereotype but before the 1974 World Cup in West Germany, the home squad managed by Helmut Schön had its very own Saipan moment. It had a name, too – The Night in Malente.

With a title like that, you’d half expect Humphrey Bogart to appear. In fact Malente is the remote resort on Germany’s north coast where Schön’s squad was based pre-tournament.

Presumably the pitches were better than Saipan’s but in terms of boredom, players such as Günter Netzer and Paul Breitner found Malente as engaging as England’s squad found Rustenberg in South Africa in 2010.

Boredom was only one issue confronting Schön’s squad, however. When Netzer and Co discovered that other squads, such as the Netherlands, were on a healthy bonus for progressing in the competition, there was an abrupt change in their patriotism. They wanted to be paid for it.

Born in 1915, Schön was from a very different era – he had scored against ‘Eire’ in 1939 in pre-war Bremen. In Malente, outraged by his players’ financial demands, Schön packed his bags in his hotel room. He was leaving.

It was chaotic, nothing like the German image. Malente was in a security lockdown due to the events at the 1972 Olympics in Munich. The players began to fidget – it’s not just Irish squads who treated the word curfew as a challenge. Some slipped away to Hamburg, 60 miles south. Leader Franz Beckenbauer nipped out to spend time with an actress. Maybe she had strong opinions on René van de Kerkhof.

Schön, meanwhile, seriously contemplated his own departure or sending all 22 players home and recruiting a second squad. It was resolved just five days before West Germany’s opening game. The players would be paid.

It doesn’t sound very “efficient”, or whatever other German cliché we fancy. We associate this kind of spontaneous disruption with the Dutch – and Johan Cruyff did indeed have a row with his federation over their Adidas sponsorship at that World Cup. He was sponsored by Puma, hence his orange jersey had two stripes down the arms, not the Adidas three.

Ultimately, of course, West Germany and Holland met in the final. This is sometimes portrayed as a triumph for Dutch Total Football, even in defeat, and within that there is an implication the Germans’ game was somehow drab.

Yet this was, individually and collectively, a fantastic German side. They had won the 1972 European Championships with a playing style Netzer called Rambazamba. Put ‘Em Under Pressure, it wasn’t.

The idea of movement, of positional interchange, was not Dutch alone. Beckenbauer was the personification of German fluidity.

Along the way from 1974, the geographic and World War II enmity simmered until the explosive night in Hamburg at Euro ’88 when Holland at last got their revenge – for 1974 and 1945.

It was not a soothing release. Tensions grew from there and when the two countries met at Italia 90, Frank Rijkaard spat at Rudi Voller twice and both men were sent off. There were skirmishes in previously peaceful towns along the Dutch-German border.

At Euro 92 they met again, in the group phase, Holland winning. The rivalry had another chapter. Again there was trouble on the border.

And in our perception, this era still has a hold, so that when Germany travel to Amsterdam on Sunday for the Euro 2020 qualifier in Northern Ireland’s group, we will sense a frisson.

It may not be there. Over time perhaps familiarity has bred respect. This will be the third Holland-Germany meeting in six months after they were paired together in the Nations League.

Louis van Gaal may also have had a role. In 2009 Van Gaal became the first Dutch manager at Bayern Munich since 1906. He bought Arjen Robben immediately. He then promoted Thomas Müller from the youth team, made Philipp Lahm vice-captain and converted Bastian Schweinsteiger from winger to the central midfielder who would dominate Germany’s midfield. There are numerous reasons why any team wins a World Cup but Germany’s victory in 2014 was, at the very least, influenced by a Dutchman.

At its height, the Dutch-German rivalry was so intense because they were both so good. But on Sunday night Germany will arrive with enough internal issues for them not to have remembered how much they are meant to loathe the Dutch.

Joachim Löw is trying to construct a new Germany after the subsidence at last summer’s World Cup in Russia, where the holders put up a weak defence of their title. Löw has jettisoned some of the old guard and brought in younger faces such as Leroy Sane, who could easily be mistaken for a traditional, stylish Netherlands attacker.

The Dutch did not even qualify for Russia and while they appear to be further ahead in their regrouping under Ronald Koeman than Germany under Löw, this match will be between teams 14th and 16th in Fifa’s rankings.

At the 1974 final there was such a focus on the brilliance of the teams they forgot to put the corner flags in and had to delay kick-off, another blow to German stereotyping. Tomorrow they’ll not forget that, nor to pay the players. Then Holland and Germany will try to rediscover who they were.

It is not nice to be criticised in print so apologies are sent in advance to France Football. The magazine published a list of their 50 greatest managers of all time this week. Rinus Michels, the man behind the Dutch Total Football above was No. 1.

You can argue with that, but it is not a preposterous choice. In Scotland, however, they have been doing their nut in because a figure Scots, and many others, consider comparable, was selected only at number 34. Jock Stein deserves a bit more esteem than that.

Three Scottish managers – Alex Ferguson, Bill Shankly and Matt Busby – made the top 11, yet each of them would be embarrassed to be thought greater than Stein. They may have claims on superiority, made by others, but Ferguson and Shankly in particular revered Stein.

Celtic’s triumph in the 1967 European Cup is often described as British football’s first victory in the competition. It was a bit more than that. It was the first time that a club outside Spain, Italy or Portugal – ie in northern European – had won it. That it was claimed by 11 men from in and around Glasgow only heightened the magnitude of the achievement.

Stein’s domestic success was just as marvellous. People forget that when he took over at Parkhead towards the end of the 1964-65 season, Celtic were about to finish eighth – a place behind Clyde. Celtic had not won the title since 1954.

They were nothing like the team they were to become. That’s because Jock Stein built it. In his first season Celtic won the league. That was why they were in the next season’s European Cup. For the first time. And they won it. Maybe France Football will reconsider.