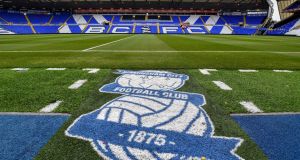 Birmingham City have been docked nine points after breaching financial rules, the EFL has confirmed.

The Sky Bet Championship club breached the league’s profitability and sustainability regulations and faced a possible 12-point deduction and a transfer ban.

The penalty sees the club drop from 13th in the table to 18th, leaving them only five points above the relegation zone.

An independent disciplinary commission heard the case on Monday, where Birmingham pleaded guilty to the charge, and decided Blues should not be given the maximum penalty.

An EFL statement read: “The Profitability and Sustainability Rules, aligned with those in the Premier League, became effective in 2015/16.

“Season 2017/18 was the end of the first full reporting period with Birmingham City the only club found to have breached those requirements, when it incurred adjusted losses of £48.787 million (€57.1m), £9.787 (€11.4m) million in excess of the permitted losses.

“The Disciplinary Commission had the opportunity to consider all relevant factors in reaching its determination, including the club’s mitigation.”

The club can appeal but it is understood one is unlikely.

The main cause of Birmingham’s deteriorating balance sheet was an increase in the wage bill from just over £22 million (€25.7m) in 2016-17 to nearly £38million (€44.5m)the following year as former managers Gianfranco Zola and Harry Redknapp were lavishly backed in the transfer market.

As a result, Birmingham have net liabilities of £55million (€64.4m) and owe parent company Birmingham Sports Holdings more than £73 million (€85.4m), a sum that will grow over the next 18 months as the directors’ report reveals a further £39 million (€45.6m) will be needed over that period to keep the club afloat.

Under the EFL’s profitability and sustainability rules, Championship clubs are only allowed to lose £39million over three years.

It is understood the club faced a charge of an “aggravated breach” after signing Danish defender Kristian Pedersen for a reported £2.25 million (€2.6m) last summer despite knowing they were under investigation.

The EFL initially refused to register the signing, saying it was “exceptionally disappointed” Birmingham had bought him, although he was eventually cleared to play.

Former boss Gary Rowett, who was sacked in December 2016, feels the club will be relieved it was not a bigger punishment.

“My initial reaction was that at least it wasn’t 12 points as that’s the sort of figure which has been about for quite some time now,” he told Sky Sports News.

“At least the nine points, at the very least, gives them a little bit of a buffer from the bottom three. That’s your main concern, like the two previous seasons, you’re in danger of a relegation battle.

“When I saw some of the figures, because they’ve been quite public, since we’ve been there I think the budget has trebled in a year which is incredible.

“It goes to show money doesn’t buy you a miles better player in the division if you don’t get your recruitment right.

“The second thing is everyone is so desperate. These are owners coming into a new club wanting to get into the Premier League.

“It’s probably the reason they bought the club. I’m not suggesting people are blameless but sometimes it tends to be the people advising the owners, rather than the owners themselves.”