Whelan eyeing a fairytale finals finish to his international career

Enticed back out of retirement, midfielder has his sights set on crucial qualifier victory 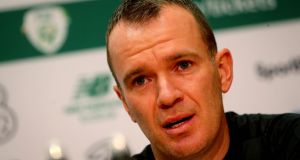 Glenn Whelan: “We know it’s in our hands and that if we win a game we’ve qualified.” Photograph: Ryan Byrne/Inpho

Having been prematurely retired once already, Glenn Whelan gives every impression that he is enjoying his second lease of life.

But the 35-year-old reluctantly accepts that if Ireland can qualify for next summer’s European Championship then that really would be the end of his international road.

With Mick McCarthy’s side now assured of a place in the play-offs next spring, the Dubliner won’t be going anywhere until at least then but he is understandably anxious that Ireland secure the win they need now to book their place at what would be, for him, one last major tournament.

Strange as it might seem, he believes the circumstances will favour them.

“I think we can do it now because win and we are through,” he says. “If this is the first or second game in the group you are a little bit more conservative about getting the right result.”

As it is, he suggests, the game plan will have a familiar feel to it: “Get in their faces and make it horrible, whatever it needs to be to get Denmark off their game and for us to create and hopefully score goals because it is a cup tie, a winner- takes-all. We would have bitten your hand off after the Nations League to be in this situation.”

Ireland were, of course, in a rather better position than this two years ago when they led the Danes 1-0 early in the second leg of their World Cup play-off and the Hearts midfielder still marvels at how that went quite so badly wrong from that particular point on. He was an unused sub himself on the night in question.

“I don’t know,” he says, looking down and shaking his head.

“Probably scoring early didn’t help because we had got something to hold on to and for Ireland over the years that has been a strong point for us. We were 2-1 down at half time and the gates were open then; we were going for it. Maybe we were too open but if you don’t have a go you won’t win the game. It showed us that Denmark have great quality if you let them play.”

A key part of his role, of course, is to stop them doing just that and McCarthy is adamant that, for all the negativity he has been on the receiving end of at times, Whelan is still well capable of performing the task at this level.

Eamon Dunphy famously disagreed and the personalised nature of the then RTÉ panellist’s reviews clearly got under the player’s skin. In contrast, he says, when Martin O’Neill ultimately concluded that his time was up, he disagreed but entirely appreciated that that as the manager, it was O’Neill’s call to make and he maintains that he is grateful for the way the northerner sought to positively stage manage his departure.

The spell of enforced exile that followed, he says, has only made him more determined to make what he can of this unexpected opportunity.

“You think it’s been taken away from you, that you’re never going to wear the green jersey again. So to get a second chance; it’s great although I am not here on a jolly up or to be a cheerleader; for me it’s about qualifying. When it goes well, it’s great but it is about qualifying.”

The play-off defeat to Denmark was one of the very few occasions with Ireland when, he says, he has ever looked back and thought, ‘Jesus Christ, I wish I was never involved there’. He is not the only one, however, who suggests the memory of it all can help drive the players on this time.

“The disappointment of that feeling of going away and getting a decent result away from home and to go 1-0 up and think we have a right chance, and then to fall apart the way we did, everyone was really disappointed. It was gut-wrenching in that dressing room afterwards.

“There was quite a lot of us involved that night so we know what it’s like to lose a game of this magnitude and if we can use that to our advantage tomorrow . . . We know it’s in our hands and that if we win a game we’ve qualified. We need to use that.”