Scottish round-up: Celtic stay ahead of Rangers on goal difference 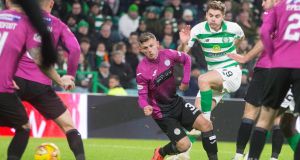 Celtic remain top of the Scottish Premiership on goal difference, with Rangers just one goal behind after both sides recorded convincing victories on Wednesday.

Celtic winger James Forrest scored hours after signing a contract extension as his side beat St Mirren 2-0 at Parkhead.

The 28-year-old had come closest to breaking the first-half deadlock but it was Mohamed Elyounoussi who opened the scoring from close range after 49 minutes.

Forrest then calmly doubled his side’s lead in the 54th minute with his 10th goal of the season.

Ryan Jack and Alfredo Morelos both scored twice as Rangers stormed to an impressive 4-0 win at Ross County.

Columbia striker Morelos got the visitors up and running in the 20th minute with his 17th goal of the season, before Jack struck twice to give Rangers a comfortable half-time lead.

Morelos then grabbed his second with a drive in the 72nd minute to ensure Steven Gerrard’s side kept up the pressure on Celtic at the top of the table.

Martin Boyle scored in stoppage-time as Hibernian overcame a two-goal deficit to salvage a point in a 2-2 draw at home to Livingston.

The visitors took a commanding first-half lead, with Steven Lawless and Craig Sibbald both finding the net before the break.

In the second half, Scott Allan pulled one back from the penalty spot before Boyle hit the equaliser in the second minute of added time.

Motherwell moved to third in the league with a narrow 2-1 victory over 10-man Kilmarnock.

Kilmarnock’s Alex Bruce was shown a red card in the 14th minute, before Liam Donnelly scored the opener from the subsequent free-kick.

Dom Thomas equalised but Devante Cole’s 54th-minute goal proved to be the winner for Motherwell, while Kilmarnock slip to fifth in the table.

An early goal from Lewis Ferguson secured all three points for Aberdeen in a 1-0 win at Hamilton while St Johnstone moved off the bottom of the table with a 1-0 win over Hearts – with Christophe Berra deflecting a header into his own net.