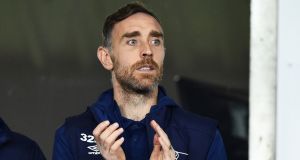 Richard Keogh looks on from the stands during the Sky Bet Championship match between Derby County and Wigan Athletic at Pride Park Stadium on October 23rd. Photograph: Nathan Stirk/Getty Images

Republic of Ireland defender Richard Keogh has been left distraught after Derby County sacked him on Wednesday. The club captain suffered serious knee ligament injuries when he was in the car that his team-mate Tom Lawrence crashed into a lamppost after a boozy night out on September 24th.

Derby had told Keogh that he could stay and see out his deal with them. Yet they stunned the central defender by saying that he had to accept a massive pay cut in order to do so. The Guardian understands that Derby offered him only a fraction of the money that he would otherwise have collected over the remainder of his contract.

The club’s hardline stance was unacceptable to Keogh and now they have told him that he is no longer in their employ. Keogh has instructed his lawyers in the matter and the Professional Footballers’ Association has also become involved.

Keogh had been out with Lawrence and a host of other Derby players, including Mason Bennett, after a team bonding day. Lawrence’s car went into the back of Bennett’s, before going across a roundabout and hitting the lamppost.

Keogh was left unconscious at the scene after Lawrence and Bennett fled. They would return 45 minutes later, when they were arrested. The men admitted to drink-driving and failing to stop at the scene of an accident when they appeared at Derby magistrates court on October 15th. They avoided jail sentences but each was ordered to carry out 180 hours of unpaid community service and banned from driving for two years.

Lawrence and Bennett were not in the Derby squad for the home win over Birmingham on September 28th but Lawrence has played the 90 minutes in all five of the club’s subsequent matches. Bennett has been used twice as a substitute. Derby fined both of them six weeks’ wages.

Keogh is understood to feel badly let down by Derby, for whom he signed in the summer of 2012 from Coventry. He started in 316 of the club’s 330 Championship matches before the car crash, plus all 10 of their playoffs fixtures. Keogh, who was pictured on crutches at Pride Park last Wednesday, when Derby beat Wigan, has been left to begin what promises to be an arduous rehabilitation on his own. – Guardian