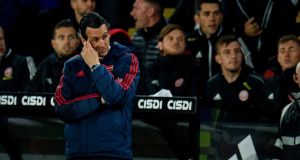 Arsenal manager Unai Emery: ‘In my career it’s normal to have difficult moments and criticism for our work and my job.’ Photograph: Peter Powell/EPA

Arsenal manager Unai Emery said he accepts fans’ criticism after his side’s insipid display in the defeat at Sheffield United but he is now fully focused on staying top of their Europa League group with a win over Vitoria Guimaraes on Thursday.

Arsenal lost their chance to climb to third in the Premier League as promoted United beat them 1-0 on Monday and the pressure has been mounting on Emery.

The Spaniard dodged a question on whether his team was now better than the one he inherited from long-serving manager Arsene Wenger and said he was satisfied with his progress at the club.

“In my career it’s normal to have difficult moments and criticism for our work and my job,” Emery told reporters on Wednesday. “We are in one point of view. The supporters’ opinion . . . we need to accept that.

“We lost a very big opportunity in the Premier League to [move up to] third in the table. We are fifth and have chances on Sunday. We have to get better but it’s one process . . . In that process I am happy.

“We need to think how we can . . . progress and achieve our targets. Immediately, that’s to win tomorrow. In this competition we won two matches and played very well with very good results.”

Arsenal are top of Group F with six points from two games and Emery believes a positive performance against the winless bottom side would help them when they host Crystal Palace on Sunday.

“Firstly, respect to Guimaraes. They are fourth in the [Portuguese] table and a good team, a competitive team,” Emery added. “We are expecting a difficult match.

“Against Eintracht Frankfurt and Standard Liege, [we had] good performances and [had] a good idea in our way to create and to find our way for playing aggressively in the future – compact and very good defensively and offensively.”

Arsenal will be without Pierre-Emerick Aubameyang and David Luiz as Unai opts to rest the pair.

Neither trained on the eve of the Group F clash, although Alexandre Lacazette was involved as he aims for a first start since undergoing ankle surgery in September.

Emery is likely to shuffle his pack for the game, although it remains to be seen if there is any place in the squad for Mesut Özil, who has been controversially sidelined by the Arsenal boss of late.