Italian manager remains unloved and unwanted by many fans despite success 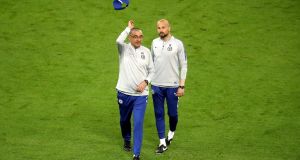 Maurizio Sarri throws his cap in the air during a training session at the Olympic Stadium in Baku ahead of the Europa League final. Photo: Adam Davy/PA Wire

Chelsea have been here before. Both to Azerbaijan, where they sauntered past a depleted Qarabag in a one-sided Champions League group game last season, but also in terms of the scenario being played out in the dugout. Their manager has just steered them into Europe’s elite club competition courtesy of a third-place finish, the campaign garnished with an extended if fruitless run in the League Cup and progress into the Europa League final. And yet he remains unloved and, by many fans, unwanted.

For Maurizio Sarri now, read Rafael Benítez back then. It is a little over six years since the Spaniard accepted the old Uefa Cup amid the celebrations on the pitch at the Amsterdam Arena and rather sheepishly, even warily, lifted it towards Chelsea’s support. That he was not instantly heckled actually represented progress. There was almost a grudging respect as to Benítez’s achievements, a tolerance that acknowledged the mess he had inherited and the quiet dignity he had demonstrated, for the most part, through a rather awkward marriage of convenience spanning seven months.

Yet there was no bellowing of his name into the night sky, and no calls for his tenure to be extended as reward for delivering this club’s fourth major European trophy. Benítez was only ever tolerated as an interim – parachuted in as a firefighter after Roberto Di Matteo’s stewardship had unravelled, with 21 goals conceded in nine games – and, even in that moment of triumph, it was as if he had gatecrashed someone else’s party. One suspects the reaction might be similar if Sarri’s Chelsea defeat Arsenal to prevail in Baku, albeit fewer than 3,000 of those in the stadium will be regulars from Stamford Bridge to witness it all first-hand.

The Italian has endured so much over his first season in English football that his comically frazzled departure from training at the Olympic Stadium – twice flinging his cap to the turf, then kicking it across the technical area – having apparently been denied a chance to practice set plays almost fitted the prevailing mood. Agitated and prone to tantrums, he has looked a man on the brink for some time.

Doubts over his philosophy – which, in truth, has hardly been put into practice effectively as yet, given that too many of those he inherited have not looked suited to his style of play – developed after an impressive start before giving way to open revolt mid-season. Anti-Sarri chants were first aired during the FA Cup defeat by Manchester United, but were pursued at Cardiff at the end of March. The vitriol has become a murmuring scepticism since, and games rarely pass without a chorused championing of Frank Lampard.

The fans have never really taken to the football, infuriated by the numbing plod into which performances have deteriorated at times. Neither have they warmed to the man. Sarri can be refreshingly honest – perhaps too honest at times, as his complaints over the recent trip to Boston to play a charity fixture demonstrated – and has a mischievous sense of humour, which is sometimes lost in interpretation. But there is none of the charisma of a Mourinho, stardust of an Antonio Conte, or charm of a Carlo Ancelotti.

Neither is he blessed with that trio’s trophy haul. He was appointed to deliver spellbinding football, the kind that had entranced with Napoli as they threatened Juventus’s dominance of Serie A. Yet without the pizzazz on the pitch, the track-suited Sarri, with his quirky superstitions and gravelly growl as he chews down on that cigarette butt, can look out of place overseeing this collective. Theirs feels an odd arrangement and, for all that the season already looks satisfactory on paper, the sense is that the relationship could be short-lived.

If the whisperings from Turin are to be believed, there are those at Juventus who would have Sarri replace Massimiliano Allegri. There have even been suggestions that a deal worth £6.2m a year is already on the table. Should they make clear a willingness to buy out the remaining year guaranteed on the Italian’s contract for around £5m – an option for a third season had been written into the original deal – then Chelsea would not kick up too much of a fuss. Yet the prospect of the former banker, steeped in his own way of doing things, walking into Juve eager to take a team who have won eight successive domestic titles to the next level still feels somewhat unlikely. Surely there would be a risk that the same issues that have infected his time in England might flare up again.

All should soon become clear. Sarri, perhaps with the first major trophy of his coaching career in tow, is due to return with his team to London on Thursday afternoon. He will meet the director Marina Granovskaia for talks in the days ahead. Benítez was only ever supposed to be a stand-in. Sarri was due to deliver something more longstanding, at least in terms of the philosophy he would impose. Yet both could still end up departing clutching the Europa League as a consolation. – Guardian

1 David Clifford sends everyone back to their corners unbeaten
2 Owen Doyle: Creeping professionalism of schools rugby a threat to the game
3 Liam Cahill uses playing regrets to drive him as Waterford boss
4 Six Nations: A 21st-century tournament that saw Irish rugby come of age
5 Longford deservedly take the points against Louth
Real news has value SUBSCRIBE
Crossword Get access to over 6,000 interactive crosswords