Move may not be permitted under ISL regulations 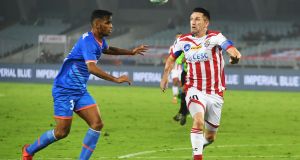 Acting ATK manager Ashley Westwood appears to have killed off the notion of Robbie Keane stepping up to take on the coach’s role until the end of the season. The former Sheffield Wednesday defender has suggested that the move would not be permitted under the Indian Super League’s regulations for the current campaign

“There is no marquee player, coach rule in ISL this season,” said the 41-year-old, indicating that the former could not be appointed as manager even for the team’s remaining five games as had been suggested might happen by local media.

The Irishman, who has played just six times since signing for the Kolkata club, will not feature tomorrow either with Westwood observing that: “Keane has a groin injury and is out for quite a while. He is out for tomorrow surely. Keane suffered an injury last game and overnight it looked sore. I hope he settles quickly. He is a very quick healer.”