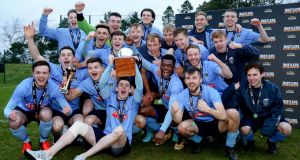 UCD celebrate with the Collingwood Cup after their win over Queens. Photograph: Philip Magowan/Inpho

A magnificent injury-time strike from Daire O’Connor gave a 10-man UCD a hard fought victory over home side Queens University in the Rustlers Collingwood Cup in Belfast.

Time was running out with the sides level on one a piece when Timmy Molloy’s accurate pass picked out the lively O’Connor, who he took a touch before firing a powerful drive well out of the reach of Queens ‘keeper Conor Lally.

It was no more than the Belfield side deserved after playing the whole of the second without striker Georgie Kelly and skipper Gary O’Neill.

Kelly was dismissed by referee Ryan Hanna in the closing minutes of the first half for a foul on Eamon Fyfe. O’Neill failed to appear for the second half after picking up a knee injury earlier in the half following a heavy challenge from centre back Callum Byers that the official deemed warranted only a yellow card.

Molloy had put UCD in front midway through the opening half when he converted a move involving himself, Greg Sloggett and O’Connor.

UCD looked likely to hold on to that lead until Ronan Young drew Queens level with a precisely placed left footed free kick on the edge of the box.

The equaliser, O’Neill’s injury and the dismissal of Kelly minutes later left UCD manager Diarmuid McNally with plenty to ponder on at the break.

Even with the extra man advantage, Queens didn’t really pose a great threat. Young’s shot from distance that Gavin Sheridan comfortably held and another effort from Jarleth o’Rourke was all they had to offer.

O’Connor shaved the post with one shot and might well have won the game when he got clear on goal but shot well over. But shortly after the winger made amends as his goal sent the cup back to Belfield.