‘We will never forget you’ - United fans make pilgrimage 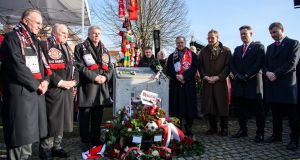 The strains of “We’ll keep the red flag flying high” sang out across Manchester Platz, or Manchester Square, Munich on a bitterly cold February day. The sun shone out of the pale blue sky that Munich does so well, helping warm the Manchester United fans gathered for the memorial service marking the 60th anniversary of the crash that killed eight of their finest players.

The mayor of Munich, Dieter Reiter, addressed the crowd, before a speech by the Bayern Munich chief executive, Karl-Heinz Rummenigge. Then Tony O’Neill, a fan representative, spoke movingly on behalf of United supporters.

At regular intervals, the strains of “We’ll never die, we’ll never die,” could be heard, drowning out the tunes played by the Bavarian brass band. The fans chanted loudly, while waving flags with “We will never forget” over their heads and brandishing banners reading: “Cut down in their prime.” The Red Army was out in full force and in fine voice. And then absolute silence. For two minutes a couple of thousand fans, some moved to tears and many bowing their heads, paid their respect to the 23 people who died in the Munich air disaster on February 6th 1958.

“I’ve never experienced anything like that before,” said Reiter afterwards, visibly moved. “The mixture between a football stadium with fan songs one moment and then the next, absolute silence. And then the unbelievable respect the fans suddenly showed. Something like that only can work when people are behind it with their heart and soul. It’s remarkable the depths of emotions shown by the fans here today.”

The commemorative event was held metres away from the site at the former airport in Munich-Riem where one of the most chilling moments in football history occurred. Sixty years ago British European Airways Flight 609 crashed on its third attempt to take off from a slush-covered runway, while carrying the team home after a 3-3 draw at Red Star Belgrade in a European Cup quarter-final. There were 44 on board, including the Manchester United team, along with supporters and journalists.

Amid the atrocious weather conditions, the aircraft skidded on the slush and ploughed through a fence. The plane’s wing was torn off when it clipped a farmhouse, while the nose struck a tree, sending the fuselage into a hut. Inside the hut, a truck filled with tyres exploded on impact. Twenty passengers were killed instantly, while three more died later in hospital. The crash victims were treated at the Rechts der Isar hospital.

Dr Robert Lindenmüller, resting on a bench on the outskirts of the crowd, recalled the day of the disaster. On duty at the hospital, he had treated one of the crash victims for a thigh injury and concussion.

Unaware at first of the extent of the disaster, the doctor admitted: “To be honest, my first reaction that day was feeling angry that I was being asked to stay behind as it was time to go home.” Then the reality of catastrophe dawned.

Unlike Lindenmüller, many who gathered on Tuesday in Munich were far too young to be alive at the time but it is clear how much the disaster still resonates among fans. “It was a tragedy and it’s still being talked about,” said Jason McKay, who travelled from Manchester with his father, Joe. “This is a pilgrimage. A trip every Manchester United fan should make once in their lifetime.”

Jason plans to return to Munich in 10 years’ time with his son, currently 14 years old, to mark 70 years since the disaster. “The young ones are picking up the baton now.”

A similar event will likely be held in 2028, Reiter said. “I think this will be repeated. It’s really notable how this tragedy has brought the citizens of Manchester and Munich much closer together.”

Some of the fans travelling to Munich simply wanted to pay tribute to one of the finest teams in the club’s history. “It would have been one of the best teams ever, which would have dominated Europe as well as the Football League,” said Joe McKay.

To others, like Tony Easom, from Salford the event brought back sad memories of a tragedy that tore at the heart of the club and its home city. “I was only seven years old that day. I can remember everything about it though. A cloud came over the city.”

Alan Day, interruptted him. “I feel the grief.” he said through tears. “What’s happening here today is bigger than the club, it’s bigger than football.

“There’s pain here, so much pain.” O’Neill told the crowd. “That pain is with the survivors and their families will have to carry this darkest day with them forever. We will not forget the families. Never will we forget their pain.”

To end the event, Tracy Malone, a United fan, stepped on stage to sing The Flowers of Manchester, the words of the haunting melody sending shivers down the spine.

“One cold and bitter Thursday, in Munich, Germany,” it starts. “Eight great football stalwarts conceded victory. Eight men will never play again, who met destruction there. The flowers of English football, the flowers of Manchester.”

Sixty years’ later it was another cold and bitter day in Munich. Fans laid down their flowers in front of the memorial site before leaving. More subdued and clearly emotional, they carried their scarves and flags away with them. “We will never forget you.”