Ribery and Robben bow out as Bayern seal Bundesliga title 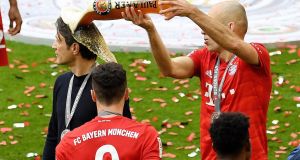 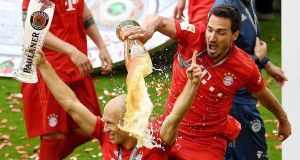 Mats Hummels pours a beer over Arjen Robben as they celebrate winning the Bundesliga. Photograph: Reuters 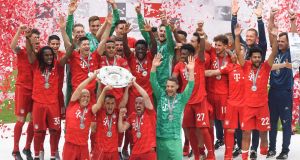 Franck Ribery and Arjen Robben called time on their long and illustrious careers with Bayern Munich by scoring in a resounding 5-1 victory that secured the Bundesliga title.

Appearing as second-half substitutes, veteran wingers Ribery and Robben, who are leaving the Allianz Arena this summer, rubber-stamped a crucial triumph over Eintracht Frankfurt with fine goals.

Kingsley Coman had sent Bayern on their way to a seventh straight championship with his strike inside four minutes but, after Serge Gnabry had a goal ruled out by the video assistant referee, Sebastien Haller levelled for Champions League chasing Frankfurt.

Following an emotional celebration from the man who moved to Bavaria in 2007, Robben followed his lead by drawing a line under a decade in Munich with the finishing touch on a clinical Bayern move.

Borussia Dortmund, who at one point this term led the table by nine points from any rival, needed to win at Borussia Monchengladbach and hope Frankfurt prospered at the Allianz.

Young England international Jadon Sancho helped them fulfil the first requirement with a volleyed opener, but even though Marco Reus ensured a 2-0 win, their efforts were in vain given the Bayern rout.

Kai Havertz saw his 28th-minute goal cancelled out by Valentino Lazaro but Bayer pushed on to secure a fourth with a hat-trick from Argentinian hitman Lucas Alario and an effort from Julian Brandt.

Wout Weghorst led Wolfsburg’s late charge into a Europa League spot by hitting three in a sensational 8-1 thrashing of Augsburg at the Volkswagen Arena.

The Dutchman claimed the match ball before 55 minutes were up, with Robin Knoche grabbing a goal before half-time, while Daniel Ginczek, Elvis Rexhbecaj and Josip Brekalo compounded Augsburg’s misery.

The Fuggerstadter would notch through Julian Schieber, but Kevin Danso put through his own net at the death to guarantee a day to forget for the visitors to Lower Saxony.

Any hopes Hoffenheim had of getting into Europe were extinguished by a 4-2 loss at Mainz. Ishak Belfodil and Andrej Kramaric put TSG two goals up but midfielder Christoph Baumgartner’s dismissal opened the door to Mainz and they ran straight through it.

Daniel Brosinski’s penalty got the ball rolling on a comeback and Jean-Paul Boetius obliged with a brace before Jean-Philippe Mateta added gloss to the result in stoppage time.

Fortuna Dusseldorf enjoyed an impressive return to the top flight this season and registered a 10th-placed finish following their 2-1 home win against relegated Hannover.

Rouwen Hemmings and Kenan Karaman both scored shortly before the hour, with Nicolai Muller replying.

Bruma missed a penalty for RB Leipzig as they went down 2-1 at Werder Bremen, where a spot-kick from Milot Rashica and Claudio Pizarro’s late contribution were enough to nullify Nordi Mukiele’s goal.

Marco Terrazzino, Luca Waldschmidt and Vincenzo Grifo also struck for Freiburg as Eduard Lowen fired a late consolation for the league’s bottom side.

Elsewhere, disappointing seasons for Schalke and Stuttgart drew to mutually miserable conclusions in a goalless draw at the Veltins-Arena. Stuttgart will contest a relegation play-off with the club who finish third in the second division: Paderborn or Union Berlin.