Dundalk continue dominance over Cork with sixth win in a row 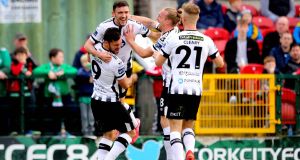 Premier Division leaders Dundalk made it six wins in a row over Cork City as they proved superior at Turner’s Cross on Friday night.

A goal in each half was sufficient for the Lilywhites to stay at the top, moving 18 points clear of their erstwhile closest challengers. It wasn’t vintage Dundalk, but – perhaps indicative of the difference between the sides at the moment – it didn’t need to be.

City, who had kept faith with the team that beat UCD last week, bar the inclusion of Gary Boylan for the injured Dan Casey, began well, but the Lilywhites were ahead with what was effectively their first attacking foray in the ninth minute.

Dean Jarvis was the scorer, the left back augmenting recent fine displays, but City goalkeeper Mark McNulty should have done better with a long-range effort from Patrick McEleney, who had shown lovely control when a cross was only headed as far as him.

While City did look to respond and a James Tilley corner needed any touch to send it in, Dundalk were on top and Seán Murray went close to creating a second after he forced a turnover, the cross just too high for Michael Duffy. Similarly, a Chris Shields pass to play in Duffy was marginally too strong.

On 28 minutes, the visitors had a great chance to double their lead when Garry Comerford fouled Murray in the penalty area but Patrick Hoban’s spot-kick came back off the post.

A low Duffy cross moments later needed good hands from McNulty but the hosts did enjoy chances in the latter part of the half, the best two falling to Graham Cummins, First, he headed over from Dáire O’Connor’s cross and then, having been played in by Comerford, he was frustrated by Gary Rogers, who was quick off his line to save.

Murray had the last real opportunity, testing McNulty with a low effort from outside the area and Dundalk stayed on the front foot after the restart. A fierce McEleney shot was heading goalwards but for the intervention of Conor McCormack’s head, but the second goal arrived in the 50th minute.

McEleney was again central as he controlled play in the centre before sending the ball wide to Seán Gannon and his cross allowed John Mountney to head home. The winger could have had his second on the hour after Hoban and Duffy linked well, but his low shot was held by McNulty.

Tilley looked likeliest to make something happen for City, curling an effort just wide on 68 minutes before drawing a save from Rogers six minutes later, Gannon helping to clear.

Dundalk did finish with 10 men as Mountney received a second yellow card with 11 minutes left, but they didn’t allow Cork back into the tie.

Danny Mandroiu’s stunning free-kick deservedly earned Bohemians a share of the spoils as they came from behind in a pulsating Dublin derby at Richmond Park.

Darragh Markey’s first goal of the season and a penalty save from Brendan Clarke looked to have earned St Pat’s victory.

But defeat would have been harsh on the Phibsborough side who contributed hugely to a riveting contest by the Camac.

With Republic of Ireland captain Séamus Coleman and under-21 manager Stephen Kenny interested spectators, Bohemians dominated much of the first half, only to somehow troop off a goal down at the break.

By far the busier goalkeeper, Clarke had to save from Danny Grant and Darragh Leahy before acrobatically tipping over James Finnerty’s header from a Mandroiu’s corner.

Dinny Corcoran also had an effort deflected wide before Bohemians fell behind against the run of play on 40 minutes.

Darragh Markey took a return cross from Gary Shaw to loop a header past James Talbot.

Bohs spurned a chance to level on 70 minutes when when Clarke dived to his left to parry away Corcoran’s penalty.

But Bohemians got their due reward from Mandroiu’s moment of brilliance on 78 minutes.

Jamie Lennon was booked for taking down the Bohemians attacking midfielder.

Further punishment duly arrived as the Ireland under-21 international rifled an unstoppable free kick up and over the wall to the top corner of the net to finally beat Clarke.

Don’t consign us to the drop yet – that was the cry from battling Finn Harps as they clocked up their second successive league win by beating Waterford in a thriller at Finn Park.

And with UCD losing to Shamrock Rovers, Harps are off the bottom, albeit on goal difference.

Waterford took the lead after just three minutes when Cory Galvin played through a pass for Aaron Drinan to latch onto and he duly fired past Peter Burke.

However, Harps were level on 24 minutes. Mikey Place was fouled by Rory Feely just outside the box and scored from the resulting free-kick.

But Harps made it 2-1 on 37 minutes. Feely was adjudged to have fouled Liam Walsh in front of goal and Place got his second goal, this time from the penalty spot.

Damien Dunleavy equalised for Waterford in the 88th minute but Seán Boyd pounced with a dramatic winner for Harps two minutes later.