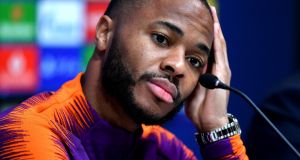 Raheem Sterling has called on more players to speak out against racial abuse but said he would not be tempted to walk off the pitch in protest because that would allow the perpetrators to win.

The Manchester City forward has been lauded for his stance against racism in the game, having first spoken out on social media last year, in a post about the way black players are portrayed in the media. Sterling also strongly condemned the abuse suffered by his England team-mate Danny Rose in Montenegro during a European Championship qualifier last month and has called on Uefa to impose strong sanctions to ensure there is no repeat of those ugly scenes.

Yet after Rose admitted he “could not wait to see the back of football” after suffering several instances of racial abuse during his career, Sterling insisted it may require more players to follow his example to ensure the problem is taken seriously. “It’s about speaking [about] what you’ve experienced,” he said. “Some people probably shied away from that but I’m a person [who] when I do feel that something’s not quite right I want to speak about it. If more players speak out then the better it will be.”

“Growing up my mum has always told me that I’m a wonderful black child. I know this,” he added. “When I hear it [abuse], it’s nothing new to me. I know I’m black and I’m proud. I’m confident with my body. If you let it get to you – as I say, some people can’t take it, but growing up I was always told to love myself and who I am.

“This is something that has been happening [since] before I was born, before my parents were born, so I can only speak up about events that happen to me and the people around me and that’s as much as I can do to raise awareness. I’m not trying to be someone that leads or something like that. I can just raise awareness and it’s for people in higher places to do their job.”

Yet asked if he would consider walking off if he was being abused during a match, the 24-year-old said he would prefer to respond with actions on the pitch.

“I wouldn’t personally agree with it [walking off],” said Sterling. “At the end of the day, I would rather go and win the game because that would hurt them even more. They’re trying to get you down; if you do walk off the pitch as a group then that makes them win. If you score a goal to win the match, then that’s . . . a better feeling which beats them. But everyone is different, everyone has their own different opinion, they take things emotionally and you have to support everyone in it.”

Last week, in the wake of racial abuse suffered by Juventus striker Moise Kean against Cagliari, Sterling was critical of Leonardo Bonucci on social media after the Italy defender suggested his team-mate had been “50-50” responsible for the supporters’ reaction to his goal, commenting that “all you can do now is laugh”. But while he accepted that Bonucci’s comments may have been taken out of context, Sterling was adamant that there was no excuse for the abuse.

“I could understand what he was saying, in terms of the players going to the fans, but at the same time there was no 50-50,” said Sterling. “At the time, I didn’t agree with what he said. There’s no reason for anyone to be racially abused, no matter if they score . . . that’s no excuse at all.”

City face Tottenham in the first leg of their Champions League quarter-final on Tuesday night as they continue their pursuit of an unprecedented quadruple. Despite the increased focus on Sterling, however, Pep Guardiola is adamant that one of his key players will not be distracted from the task in hand.

“I think he can handle it. He handles it well,” said Guardiola. “Unfortunately it is not a problem with football or one specific area. It is a social problem. I never understood why, because Raheem and all the black guys didn’t choose the colour of their skin. Nobody chooses, not even myself, the colour of my skin, why I am different, how we behave, our personalities or how we are or develop as a human being, what makes us different. So it’s always difficult to understand that, in the 21st century, we are debating this kind of situation.”

1 Six Nations: Ireland are contenders but England still the team to beat
2 In Donegal Michael Murphy is seen, simply, as a godsend
3 Owen Doyle: Creeping professionalism of schools rugby a threat to the game
4 Mike Catt hopes to have Irish backs purring in Six Nations
5 The world spins but it’s soon back to Dublin and Kerry
Real news has value SUBSCRIBE
Crossword Get access to over 6,000 interactive crosswords