Pep Guardiola says Manchester City are out to win quintuple, not quadruple 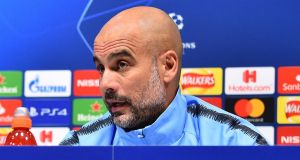 Pep Guardiola has refused to entertain talk of the quadruple but perhaps the question has been wrong all along. How about the quintuple? He and his Manchester City players are chasing three more trophies before the end of May and the quest continues at Tottenham in the first-leg of the Champions League quarter-final on Tuesday night.

But, as far as Guardiola is concerned, his team have already won two pieces of silverware this season - the Carabao Cup and, yes, the Community Shield, which they collected after a 2-0 win over Chelsea last August.

“Why does nobody count it?” Guardiola wanted to know. “Why? The people say we’ve won one title so the Community Shield? Maybe it counts for last season but when we went on holidays, it was not in our pocket. In Spain, in Germany – where I have been – the Super Cup is an important trophy. Always, we’ve had the feeling we’ve won two titles and have three to play. But the people say: ‘Just one title, one title.’

Quirky old England. The competitive status of the Community Shield has long been open to debate. Do goals scored in it, for example, count towards a player’s tally for the season? Nobody really knows. Guardiola is not the first non-British manager to be puzzled by it. Remember Jose Mourinho and the ‘treble’ he celebrated with Manchester United in 2016-17? The Community Shield was certainly a part of that haul, together with the League Cup and Europa League.

It is was difficult to tell whether Guardiola was being entirely serious, although the smart money was on him being so. Yet what the interlude emphasised was the City manager’s unwavering focus and his obsession with striving to win. Absolutely everything.

The equation for the hotly anticipated, all-English first-leg is clear from a Spurs point of view. They intend to harness the energy and emotion of a sold-out crowd at their new stadium, which opened last Wednesday with the 2-0 Premier League win over Crystal Palace; start quickly and strike decisive blows.

Kevin De Bruyne, the City midfielder, has been dismissive of the venue’s potential impact. “Everybody has a stadium, everybody has supporters – in the end, it’s a stadium with supporters,” he said.

But consider this from Son Heung-min, who felt the electricity against Palace when he scored the ground’s first goal: ”Maybe the City players don’t realise because they always play at home but we’ve had nearly two years away from our home stadium,” the Spurs forward said. “We missed home a lot and we can show City the difference between Wembley and our new stadium.”

Guardiola cut a relaxed and confident figure, setting the tone for his players, and focus was also his watchword on the question of whether atmosphere and accoustics could influence the outcome.

“It affects if we think about the spectactors; if we think about what we have to do on the pitch, it doesn’t affect,” Guardiola said. “It’s the second time Spurs play at home [in the new stadium] so we know exactly what we are going to face. If we want to make a step forward as a club, as a team, we have to know how to handle these situations. If we don’t, it’s because we are still not ready.”

City did not look ready at the same stage of last season’s competition. They went to Liverpool for the first-leg, felt the full force of a frenzied Anfield, fell 3-0 behind after 31 minutes and could not rescue the situation. Spurs are the underdogs now, as Liverpool were then, and the hope from their side is that the parallels can extend to the scoreline.

The Anfield tie has been a talking point and both Mauricio Pochettino and Guardiola were asked about it on Monday, although the latter, predictably, gave it short shrift. “The way we played was not that bad,” Guardiola said. “The first three shots on target, Liverpool scored three goals.”

What is plain is that the first-leg’s opening quarter could feature fireworks. “We want to start being tough, very aggressive, trying to dominate and with a high tempo,” Pochettino said. “We played a lot of games against each other in Spain, when I was at Espanyol and Guardiola was at Barcelona, and he knows we’re brave, that we like to go forward, be protagonists. Afterwards, the quality of the players on the pitch is going to put the [likelihood of] victory on Guardiola’s side but we’re going to try to beat them.”

Guardiola was asked whether he would tell his players to attack at the outset, as normal. “Yes, definitely,” he replied. “Nothing changes. Maybe Tottenham are going to plan a game one against one, in a high press, so aggressive. We’ll prepare for that. If they do it, we have to try to do it more.”

Pochettino described Spurs’s presence in the quarter-finals as a “massive bonus” after all of the difficulties they have endured this season – in particular, the delays in getting to the new stadium – but for Guardiola, the situation is different. He has been here before and he knows how to win titles. To him, the pressure of the favourites’ tag ought to be embraced.

“You cannot do what we have done this season and last season without specific qualities as human beings, professionals and football players,” Guardiola said. “Especially consistency, when everybody pushes each other. We are at this stage, almost at the end – in the winter of the season – and we know exactly what we are playing for.” – Guardian