PSG view €220 million Neymar as the man to kickstart project 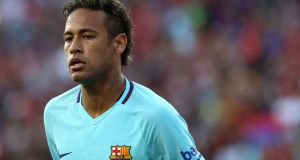 A few hours before last season’s Champions League final, most of soccer’s great and good were crammed into the lobby bar at the Hilton hotel in central Cardiff.

Agents, managers, executives and power brokers from the game’s major confederations huddled together in corners, or leaned in close for whispered conversations on overburdened couches. In the middle of it all, Nasser al-Khelaifi, the chairman of Paris St Germain, and Jorge Mendes, the agent for the Real Madrid star Cristiano Ronaldo and Manchester United Manager José Mourinho, among many others, grabbed a few moments to talk.

That one brief, discreet conversation, held in a room full of their peers, was enough to spark a frenzy. Almost as soon as Real Madrid finished celebrating its victory in the final hours later, reports started to emerge suggesting that PSG. would once more try to coax Mendes’s most famous client, Ronaldo, to the French capital.

All of the reports, as with so much written about transfers, were wrong. By that stage — some time before, in fact — Khelaifi’s attention had drifted elsewhere.

For more than a year, Paris St Germain have only had eyes for Neymar.

The intensity of that attraction is evident, most immediately, in the scale of the financial commitment PSG seem prepared to make to bring Neymar from Barcelona to Paris. To date, the French club has not balked publicly at the reported prospect it is willing to meet the €222 million release clause in Neymar’s contract, a figure that would more than double the current transfer record.

PSG also appear willing to pay the player a salary of €30 million every year, for five years, as well as guaranteeing his father, who acts as his agent, a fee that could rise as high as €40 million. Some estimates put the total cost of any potential transfer at around €450 million.

But just as telling is the club’s willingness to contort itself into a shape that Neymar might find appealing. Dani Alves, Neymar’s former teammate at Barcelona, has already been signed from Juventus, and Lucas Moura, a friend of Neymar, will be retained. PSG are also considering reigniting interest in Liverpool’s Philippe Coutinho, another of Neymar’s confidants, before he can move to Barcelona. That all three are Brazilian — as are the P.S.G. defenders Thiago Silva and Marquinhos — is neither coincidental nor insignificant.

There are those within the French club who worry that that sort of determination, in certain lights, can take on the veneer of desperation. There is also an ever-present concern that perhaps PSG are being taken for a ride, being used as a bargaining chip in Neymar’s efforts to secure more money, and more prestige, at Barcelona. They have been burned before: PSG’s pursuit of Ronaldo never did benefit PSG, but it most certainly benefited Ronaldo in contract negotiations with Real Madrid.

That Khelaifi, the chairman of PSG’s owner, Qatar Sports Investments, is willing to run that risk again indicates that his attraction to Neymar is not some mere vanity project; it is not simply a desire to express PSG’s or even Qatar’s financial power; it is not the Galáctico thinking of Real Madrid, the expensive indulgence of a man or a club seduced by Neymar’s celebrity. At the figures currently being discussed, it is nothing so trifling. At half a billion euros, it seems to be something closer to a necessity.

When Q.S.I. first invested in PSG in 2011, its stated aim — according to Khelaifi himself — was to win the French championship “for the next three years” and to become “competitive” in the Champions League.

By most measures, that has been accomplished. Although Monaco won Ligue 1 last year, PSG had picked up the four previous championships. And while they were spectacularly eliminated by a Neymar-inspired Barcelona in the round of 16 of the Champions League in March, they had become a fixture in the quarterfinals in the years before that.

They wanted to go further, of course. “Our aim is to make the club an institution respected around the world,” Khelaifi said last year. “If we are going to make that happen, we have to win the Champions League. That will take the club to a new dimension. Any team that wins it is seen differently by everyone else.”

Still, progress had been made. Khelaifi was correct to assert that PSG are now viewed by Europe’s biggest clubs as a “serious challenger” to win the competition. “Most of them want to avoid us in the last 16,” he said. “That is a mark of respect in itself.”

The problem is that progress has, in the last two years, stalled. The core of PSG’s team — Silva, Thiago Motta, Edinson Cavani — arrived in Paris between 2011 and 2013, the first great flourish of the new Qatari owners’ largess.

The impact of more recent additions, apart perhaps from Ángel Di María, has been more limited; PSG have proved unable to make the final leap from contenders to champions, finding, as so many do, that at the summit, the smallest steps are the steepest.

The club recognise the need for change — Khelaifi acknowledged last year that “after five years, you must start a new cycle” — and started, belatedly, to act upon it. Unai Emery, the club’s manager, was assured of his position despite the twin disappointments in the league and in Europe; Antero Henrique has arrived from Porto as the transfer market guru; Maxwell, the recently retired defender, has been employed, partly, to bridge the gap between the executive suite and the players.

But all of that will go only so far. The PSG project needs to be kickstarted. In 2012, Khelaifi identified Zlatan Ibrahimovic as the player who would provide that impetus. Five years later, he has settled on Neymar as Ibrahimovic’s spiritual heir, the player who can help PSG punch through European soccer’s glass ceiling.

It has never been PSG’s aim to be the equal of Barcelona, Real Madrid or Bayern Munich. The club knows that money cannot buy the prestige or the tradition that those three — and Manchester United — possess. Instead, as PSG’s general manager, Jean-Claude Blanc, told the Financial Times, it hopes to be “the first great club of the digital era.”

Neymar, 25, fits that profile perfectly, of course, more so even than Ronaldo: He is seven years younger; his social media branding is more personal and organic, less stilted and sponsored; he carries a millennial authenticity. He has the talent to win matches against elite opposition, as PSG discovered this spring. And he has sufficient profile to bestow legitimacy: signing Neymar would be more than capturing a player; it would be proving a status.

Five years ago, when Ibrahimovic was presented as a PSG player, he stood under the Eiffel Tower and declared that this was the club of the “future.” As the club’s momentum has stuttered in recent years, it has ceased to feel like that. Neymar would bring it all back. That, to Khelaifi and to PSG, is worth any price at all.