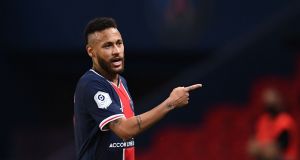 PSG’s Neymar walks off after seeing red during the league game against Marseille at the Parc de Princes in Paris on Sunday. Photograph: Getty

Paris Saint-Germain have thrown their support behind Neymar after the Brazil forward reported being a target of a racist slur during the French champions’ 0-1 home defeat by Olympique de Marseille on Sunday.

Neymar (28) was one of five players sent off during the match at the Parc des Princes. He then told the fourth official he had heard a racist comment while walking off the pitch.

“Paris Saint-Germain strongly supports Neymar jnr who reported being subjected to racist abuse by an opposing player,” said the club.

“The club restates that there is no place for racism in society, in football or in our lives and calls on everyone to speak out against all forms of racism throughout the world.

“Paris Saint-Germain looks forward to the LFP’s disciplinary commission to investigate and ascertain the facts. And the club remains at the LFP’s disposal for any assistance required.”

The clash was littered with fouls throughout and boiled over in the last minute of stoppage time when a full-scale brawl erupted on the pitch.

PSG’s Neymar, Laywin Kurzawa and Leandro Paredes as well as Marseille’s Dario Benedetto and Jordan Amavi were sent off after players aimed punches and kicks at each other.

Neymar, who struck Spaniard Alvaro Gonzalez on the back of the head, said after the match that his only regret was not hitting the Marseille defender in the face.

He also said he wanted the match officials to “position themselves impartially . . . I was punished with a red because I wanted to hit someone who offended me . . . I thought I could not leave without doing something because I realised that those in charge would not do anything. In our sport, aggressions, insult, swearing are part of the game of the dispute . . . but racism and intolerance are unacceptable.”

1 Saracens’ emphatic opening salvo enough to keep Leinster at bay
2 Next stop the Champs-Elysées in green for Sam Bennett
3 Born to ride, born to win: Sam Bennett, the making of a green machine
4 Maro Itoje proves he has no peer in the northern hemisphere
5 Saracens deliver the brutal blueprint on how to beat Leinster
Real news has value SUBSCRIBE
Crossword Get access to over 6,000 interactive crosswords