Sporting upsets: Rossi’s hat-trick felt to us like the day that football died 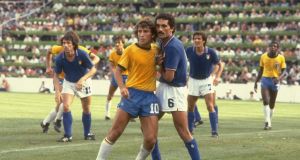 Zico of Brazil is tightly marked by Italy’s Claudio Gentile during the second-round match of the 1982 World Cup at Estadi de Sarrià in Barcelona. Photograph: Allsport

Jumpers for goalposts, a football philosophy that translates into language and culture around the globe, one that was eloquently revived by Keith Kelly in Ballybrack for adults to relive their youth and from there replicated the length and breadth of the country. It spoke of childhood games on patches of grass, mud, tarmac or concrete, whatever surface was available.

In some respects those games were the antithesis of organised football, lacking in structure, instead pandering to individualism that wasn’t necessarily framed by ability or talent. It was inclusive, catering for all ages, shapes and sizes. There were no trials or club colours, a case of come as you are.

Those who brought their own goalkeeping gloves were generally frowned upon, far better to spit on the hands for grip and put up with the stinging sensation that accompanied a well struck shot. Everyone took a turn in goal. Matches lasted for hours, punctuated by meal times, players coming, going and returning.

There were no managers or coaches, no referees, no offside, only arguments about the score, a tackle, whether it was hand to ball or ball to hand, or to where the nonexistent lines of the penalty area should stretch. There were no indirect free-kicks and penalties were hard won, based on a consensus.

This was football in its purest form, enjoyable escapism where the participants took on alter egos. In the 1980s Maradona, Zico, Socrates and Platini would have been popular choices. There were one or two oddballs who modelled their games on defenders like the moustachioed Italian hard man Claudio Gentile. No one was allowed to claim to be Pele because that would have been too far fetched.

It acted as a counterpoint for those who played with a club, where there was a structure to everything, training and playing. The numbers on the jerseys carried defined roles and usually came with boundaries; roving commissions were limited.

Playing for Granada in the South Dublin Boys League meant games against Ballybrack Boys, Carriglea, Rory O’Connor, Rockford, Wayside Celtic, Dalkey United, Mackintosh, Patrician Villas and the pilgrimage to Everitt in Bray. That was the organised football, more serious fare, but the green spaces in Ardagh, Hollypark and Granville Road was where we indulged ourselves; modelling the ‘Panenka penalty’ the ‘Cruyff turn’ or the ‘Eder free-kick,’ the run-up for which started in a different postcode.

As a young teenager in 1982 it would have taken a flinty heart not to be captivated by Tele Santana’s Brazil team that started as favourites for the World Cup, hosted by Spain. Their pedigree was unimpeachable. The previous year in May 1981 they had beaten England, France and West Germany on a European tour but it was the way they played that was so attractive.

Theirs was the game from the green spaces, where everyone bombed forward, on the pretext of scoring more goals than the opposition. Brazil’s formation has been described as 4-2-2-2 or 2-7-1 but as Zico once observed that the players circulated and interchanged, never hemmed in by conventional roles.

The fullbacks Leandro and Junior spent more time in their opponents’ half than their own. Cerezo and Falcao were the holding midfielders – although that phrase seems misplaced in describing them given their prowess on the ball – while the sublime attacking totems, Zico and Socrates, provided the creative spark. Eder, or the Cannon as he was known for his ferocious left-foot shot, had no fixed abode, wandering wherever he pleased.

Socrates, Brazil’s captain has long been part of an Irish urban myth; principally that he attended the College of Surgeons in Dublin while studying to be a doctor and played for Shelbourne reserves or UCD, depending on the source. None of it was true.

There were weaknesses, starting with their goalkeeper. For most of the tournament it would have been fair to ask, where’s Waldir? The answer would have been rooted to his line, a bemused bystander. Waldir Peres may have felt abandoned by his back four most of the time but he was also prone to the odd howler, notably in the opening 2-1 victory over Russia.

Former Brazilian coach Joao Saldanha noted after Serginho had been replaced following an inauspicious performance in a 4-1 victory over New Zealand, “now the ball is round again”. It did not go well for the tall centre forward in the Italian match, scuffing his shot well wide from 10 yards when clean through with just the 40-year-old Dino Zoff to beat.

At least centre backs Oscar and Luizinho had each other for company, because most of their team-mates were nowhere to be seen when it came to defensive graft. Still Brazil beat Russia 2-1, Scotland 4-1 and New Zealand 4-0 in the first group stage and then Argentina 3-1 – Maradona was sent off in that game – in the first of the matches in the second group stage.

On July 5th, 1982, they faced Italy, who had beaten Argentina 2-1, knowing that a draw would suffice to send them into the semi-finals. The Italians had scraped through the opening phase of the tournament, drawing all three matches against Poland 0-0, Peru 1-1 and Cameroon 1-1, and only advancing on goal difference by virtue of scoring two goals to Cameroon’s one.

Italy’s team included striker Paolo Rossi, who had only just returned from a two-year ban – it was reduced from three on appeal following the Totonero match-fixing scandal in Serie A and Serie B, his reappearance just two months before the World Cup began. He would play the pivotal role in deciding the outcome that day at Espanyol’s Estadi de Sarrià in Barcelona, scoring a hat-trick in a 3-2 victory.

Rossi ended up as the tournament’s leading scorer, grabbing both in Italy’s semi-final win over Poland and the first in the 3-1 victory over West Germany in the final. He was also voted player of the tournament, a far cry from being described as “a ghost aimlessly wandering over the field,” in the first group stage.

Brazil had a reputation for starting matches in a somnambulist state so it was altogether a surprise when Rossi headed in an Antonio Cabrini cross after just five minutes. Zico and Socrates combined to fashion an equaliser but then Cerezo misplaced a pass that instead found Rossi on the edge of the Brazilian box and the striker thumped it through Peres’s fingertips.

Italy, marshalled superbly by Gaetana Scirea in the libero role, and with Gentile marking Zico in every sense of the word, denied their opponents time and space. Brazil were rattled but with 22 minutes remaining Falcao equalised to make it 2-2. It’s the hope that kills you.

There was a horrible irony that Brazil had 11 players back in their penalty area when Peres sloppily conceded a corner kick six minutes later. Junior perhaps daydreaming about his next counterattack played a couple of Italians onside as his team-mates nudged forward, looking to vacate the area. Rossi pirouetted and hooked Marco Tardelli’s shot past Peres.

Italy had a fourth goal from Giancarlo Antognoni incorrectly ruled out and in watching the game again certainly deserved their victory. Rossi, the man whom the Brazilians subsequently called ‘The Executioner’ said of his opponents that day: “They did not look from this planet. That Brazil side was the best I had seen. Those players could have worn blindfolds and they would still have known where each other were.”

Brazil’s 1982 team is ranked second behind the 1970 World Cup-winning side in the public’s affections across various polls down through the years, more so than other teams who subsequently went on to lift the trophy. There is little point in pointing to their tactical naivete or suggesting that they should have tried to cling on for a draw at 2-2. They weren’t hardwired to do that.

Socrates, who died in 2011, said in his autobiography: “The team’s defeat in Barcelona was a crushing blow to the Brazilian style of play. From that moment on the emphasis changed to focus on results.

“The business side of the game grew frighteningly quickly and money was channelled to the winners, even if they were poor-quality winners. Brazilian football would never be the same again. Even though it is often subconscious, we now try and copy European pragmatism. With that, our game has become more rational and tactically more rigid and it has lost some of the identity.”

He also stated: “We had a hell of a team and played with happiness. Then we came across the Italians. Rossi had three touches and scored a hat-trick. Football as we know it died that day.”

But perhaps the words that best resonate to characterise the boys from Brazil in ’82 are those of Santana, who told his team in the dressingroom afterwards: “The whole world was enchanted by you. Be aware of that.”

They espoused the principles of the Joga Bonito (The Beautiful Game) and while there was no silverware they will be remembered for the way they played: the professional version of the ‘Jumpers for Goalposts’ football ideology.

1 Saracens’ emphatic opening salvo enough to keep Leinster at bay
2 Next stop the Champs-Elysées in green for Sam Bennett
3 Born to ride, born to win: Sam Bennett, the making of a green machine
4 Maro Itoje proves he has no peer in the northern hemisphere
5 Saracens deliver the brutal blueprint on how to beat Leinster
Real news has value SUBSCRIBE
Crossword Get access to over 6,000 interactive crosswords