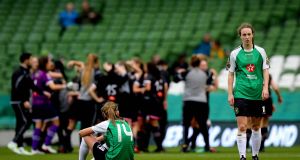 Katrina Parrock’s first-half winner claimed the FAI women’s Cup and the treble for Wexford Youths at Lansdowne Road on Sunday but Peamount United were left bemoaning some refereeing decisions.

Republic of Ireland international Amber Barrett was involved in all the contentious incidents, two genuine penalty claims sandwiched in between by a dubious one.

“We had a stonewall penalty in the first half turned down and might have had another one later on. The defeat is difficult on the girls because I thought we were the better team.”

Firstly, on the stroke of the interval, Orla Conlon’s shove on the forward went unpunished. Barrett could easily have been booked for simulation 12 minutes from the end when she hit the ground following another Conlon challenge and that may have influenced a stronger claim in stoppage time going against her.

Either way, Peamount hardly threatened Naoisha McAloon in the Wexford goal once they fell behind.

Likewise, the victors weren’t exactly fluid in the final third but Parrock’s moment of magic proved the difference.

The winger, who won four All-Ireland camogie medals for her native Wexford, swivelled brilliantly from Emma Hansberry’s cross 11 minutes before the break to notch the only goal of an evenly-contested decider.

That breakthrough came following an early spell of pressure by Peas. Áine O’Gorman and Megan Smyth-Lynch wasted a couple of clearcut openings. Just a minute after Edel Kennedy had a goal disallowed, Parrock repeated her trick from the semi-final by bagging the winner.

Still only 28, Camogie’s loss has been football’s gain. Ireland senior boss Colin Bell, preparing for the next European Championship qualifiers, could do with having her services.

“I’ve really enjoyed playing football,” she said. “I felt I’d ticked every box in Camogie so hopefully I can push on now. Getting a senior Ireland cap would be a nice achievement.”