Players flew to Bangkok after emotional victory over Cardiff on Saturday 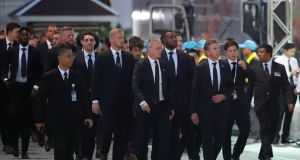 Leicester players and staff have arrived in Thailand to pay their respects to the club’s former owner Vichai Srivaddhanaprabha.

The squad flew to the Far East after an emotionally-charged 1-0 win at Cardiff on Saturday, their first fixture since Srivaddhanaprabha and four others were killed in a helicopter crash at the King Power Stadium a week earlier.

Goalkeeper Kasper Schmeichel, who admitted he was shaking during the warm-up against Cardiff, was among the Leicester playing staff at a Bangkok temple on Sunday.

The Leicester squad are due to attend services in the Thai capital on Sunday and the following day before they return to England on Tuesday.

Demarai Gray scored the only goal in the 55th minute at Cardiff to earn Leicester the three points, and removed his shirt to reveal a tribute to Srivaddhanaprabha.

The Leicester players and staff also paid tribute to their former owner with the club’s travelling fans after the final whistle.

Speaking to the BBC’s Match of the Day programme, Schmeichel said: “It has been hard. We have tried for a few hours a day to be professional and train hard, but everyone wanted to play and win for his family. His family have been strong, with the courage they have had.

“I feel just an overwhelming sense of pride of being part of the family that Vichai built and the extended family of Leicester City.

“It was nice to get a win to take to Thailand now and hopefully we did his family proud.

“You couldn’t ask for a better chairman. There are few people who come along in this life that have an impact on you. He had that on me and so many people, and the outpouring of grief around the world shows that.

“Everyone grieves in different ways and the opportunity was given to attend the funeral and we wanted to go. We are a family and wanted to pay our last respects together.”