Wayne Rooney to play for England in friendly against USA 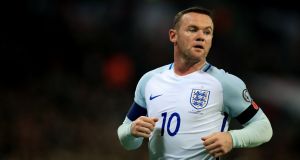 Wayne Rooney is set to come out of international retirement for England’s friendly against the United States later this month to mark his contribution to the national team.

The English Football Association announced Rooney – who is England and Manchester United’s record goalscorer – would be part of Gareth Southgate’s squad for the match on November 15th.

The 33-year-old, now playing in Major League Soccer with DC United, has not played for England in almost two years, but the match at Wembley a week on Thursday is set to be his 120th and final senior appearance in an England shirt.

The match against the United States will officially be called the Wayne Rooney Foundation International.

Rooney said: “I am truly humbled and hugely excited to play for England at Wembley again. I would like to thank Gareth Southgate and The FA for inviting me back and helping to support my Foundation in the process.”

Rooney, the former United and Everton forward, who scored 53 goals for England, announced his retirement from international football in August 2017.

Rooney’s last international appearance for England was in their 3-0 World Cup qualifying win against Scotland at Wembley on November 11th, 2016.

Rooney is set to follow in the footsteps of Lukas Podolski whose international career was celebrated by Germany when he came out of retirement for one final game.

The former Arsenal and Bayern Munich striker scored and captained Germany in their 1-0 win against England in March, 2017.

1 The Game Changers: Vincent O’Brien, a pioneer who took Irish racing to the world
2 The unsolved mystery of Goran Ivanisevic’s stunning Wimbledon win
3 Tipping Point: DeChambeau’s transformation raises questions, but who will ask them?
4 José Mourinho: Half-time row between Son and Lloris was ‘beautiful’
5 John O’Sullivan: IRFU must recognise vital role of clubs in rugby's return
Real news has value SUBSCRIBE
Crossword Get access to over 6,000 interactive crosswords