Vinny Perth: ‘I’m six, 10 weeks away from losing my job at any stage’ 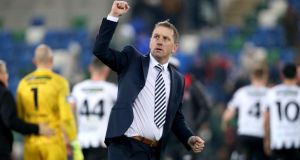 Dundalk manager Vinny Perth is looking to change his role away from coaching in his second year in charge at Oriel Park. Photograph: Brian Little/Inpho

As he prepares to kick off his second campaign in the driving seat at Dundalk, it comes as a surprise when Vinny Perth admits that he is driven by fear. Last season’s remarkable success leaves the 43-year-old with a long way to fall during the months ahead but as Shamrock Rovers head to Oriel Park for Sunday’s President’s Cup, the hosts still do look like the side to be most afraid of in the 2020 title race.

Rovers will hope they are better placed to come between the champions and a sixth title in seven years. while for the likes of Bohemians, Derry City and St Patrick’s Athletic the aim, first and foremost, must be to narrow the gap.

Perth, though, is acutely aware that a poor run of form can be career altering for a football manager. Having progressed from a point where he was recognised as they guy who had been in the Dundalk dugout during a big European win the night before while helping to instal a shop’s new deli counter, he appreciates he could be back doing a real job for a living just as fast.

“I’m six, 10 weeks away from losing my job at any stage,” says the man who some speculated would have lost it had Dundalk, after a stuttering start to the campaign, not beaten Bohemians in their 10th game of last season.

“I’m driven by it,” he says, “making sure that you are working hard enough to ensure it doesn’t happen and yet it could happen no matter how hard you try. It’s a difficult industry.

“I’m driven by fear,” he continues. “I worked in the private sector for many, many years. I still drive past that job and I don’t take what I do for granted. I got some personal honours at the end of the season and they were massive [to him personally] but you have to remind yourself not to rest on your laurels. It is a big cliché but I do believe in striving to be better tomorrow.”

The crisis – if you could call it that – passed, with the points dropped early on, as well as the battles he had to fight off the pitch as the club sought to impose a structure that handed much of the responsibility for player recruitment to a third party, only serving in the end to make the final table look that much more impressive.

The team virtually matched the achievements of Stephen Kenny’s final season by every measure, and though they missed out on the FAI Cup in a penalty shootout against Shamrock Rovers, there were League and Champions Cup successes to celebrate.

Kenny, who Perth has previously described as having been like “a big brother” to him, still cast a long shadow over last season and Perth must have tired slightly of being asked about his predecessor as the campaign wore on. Its successful conclusion provided what seemed like the best answer imaginable from his perspective, even though he admits that his own role hadn’t actually changed in quite the way it should have after he inherited the managerial reins (and much more recently, the title).

Those close to the club have noticed that he has been making more appearances at events around the town on its behalf, performing the sort of ambassadorial role that Kenny took so well to. On a more personal level, meanwhile, he has been working hard to develop his own leadership skills, something he feels has the potential to benefit not just himself but also the team during the months ahead.

“I would have done a certain amount of leadership courses,” he says. “I’m not a reader but I’ve done a huge amount of reading on leadership. I manage 35 people and I’ve spoken to people in other sports about that. People like Jim Gavin would have given me some insight. I’ve been in that rugby world to see what they do with Leinster and the IRFU.

“But now it’s sort of time to forget all of that; take what I learned and see if I can put it into practice. Only time will tell but I do believe I’ve got to get better this season.”

At home, there is limited enough scope for improvement in terms of the team’s results, although there were certainly a few games that he and his players might look back and feel they should have won. Ten points from 12 against their nearest rivals left them with a fair amount of leeway in the end but they will, of course, do well to repeat that particular trick.

In Europe, it is a slightly different story. Dundalk have made it through two qualifying rounds in the three years since they featured in the group stage of the Europa League and last summer they did not actually win any of their six games. It is the toughest of nuts to crack and yet that is a big part of what he must do admits Perth, who says retaining the title and being at their best in Europe, rather than wider domestic success, is the focus for 2020.

“Last year we set that out [with the treble] as a goal,” he says, “but you need so much luck to go your way in cup competitions. We have to challenge the group and raise the bar this year. We have to be better at what we do around Europe time and around how we play in the league.”

The wider league could do with them, or at least one of the other three teams, having a good run this summer, for it’s the way in which many neutrals judge the strength of the game here, but as Perth points out, the assessment lacks context.

“Everyone in Europe is chasing Europe,” he says. “I was talking to a European player and it looks like he is going to go to Riga for three or four times the money I could afford to pay him. The three teams we played last year, one got a playoff and the other two played in the group stages.

“At times we got criticised for certain performances in Europe and rightly so, but that’s the standard now, it’s getting higher and there is huge investment in clubs to go after Europe. So it is difficult and yet I do think that Irish football needs somebody else to crack the group stages because the environment is there to help our league kick on so we have to chase it.”

He is upbeat about “the environment”, insisting that changes at the FAI can allow the league and its clubs to “kick on”. Dundalk will start as favourites next week to lead the way again but it is likely to be the summer before we know if Perth has any cause for sleepless nights.