St Pat’s aiming to make an early statement against champions 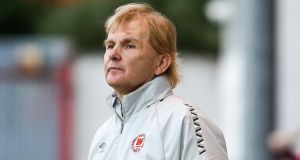 Liam Buckley: “They’re coming to us as champions and they’ve had a good win the other day, but we’ve had a good pre-season.” Photograph: Gary Carr/Inpho

Having played likes chumps at times through the early part of last season, beating the champs in October provided a late highlight for a rejuvenated St Patrick’s Athletic. This evening’s game at Richmond Park will provide an early indication of what both sets of fans might expect during the coming months.

Cork City had already wrapped up the title last time they came calling and so John Caulfield’s first 11 will be back at full throttle this time but the Dubliners will see this as an opportunity to demonstrate an ability to play a part in things at the right end of the table this time around.

“It’s a big game,” says manager Liam Buckley. “They’re coming to us as champions and they’ve had a good win the other day but we’ve had a good pre-season. I’m excited about it but also interested to see how it goes because as champions they represent the benchmark; if you can beat these then you should be capable of being in the mix [for a top four finish].

“We have to come up with some sort of game plan to counter what we are seeing Cork do and if we can do that, it gives us some chance of getting something out of the game.”

Buckley is without Killian Brennan or Thomas Byrne for the game while the visitors will be without John Dunleavy for another couple of weeks and, most likely, Garry Buckley and Josh O’Hanlon for this evening.

Dundalk confirmed the signing of defender Daniel Cleary on Thursday and the 21-year-old will be available if his international clearance comes through.

Stephen O’Donnell, John Mountney and Sean Hoare all miss the visit of Bray through injury but Karolis Chvedukas and Dean Jarvis are amongst the players in contention to make league debuts for the club. Wanderers are without injured centre-back Conor Kenna while 21-year-old Aaron Dillon is in contention to start in goal.

“Nobody wins the league in any country every year,” says Stephen Kenny when asked about the new owners’ suggestion that that is their aim. “Barcelona or Real don’t do it . . . Juventus have a bit of thing going in Italy but nobody does it every year.

“We’ve always had great humility in this group. We started with nothing and we did well. Now, it looks like we will have some resources in the future and we will want to capitalise on that but it will be a gradual thing, it’ll be over the next couple of windows that hopefully we will get better.”

Shamrock Rovers will be hoping to show some early signs of improvement this evening at their arch rivals Bohemians who completed the signing of former Leeds United striker Eoghan Stokes yesterday and could have the 21-year-old available this evening, international clearance permitting once again.

The hosts have Ryan Swan out long term and Cristian Magerusan laid up for a bit too but Rob Manley has come in and manager Keith Long is upbeat about his side’s derby prospects in front of their own crowd.

“They seem to feel that this is a real chance for them to put one over on us,” acknowledges Rovers midfielder Ronan Finn, “but from our point of view there’s nothing sweeter than beating Bohemians in their own back garden. It’s probably my favourite place to get three points.”

The visitors, who will be without the suspended Trevor Clarke, struggled on the road last year but Finn dismisses the notion that the investment in underage structures can be used as an excuse.

Waterford return to the top flight with high hopes of making a significant impact although they may have to kick off the campaign without captain Paul Keegan who is a doubt for this evening’s visit of Derry City. John Martin looks likely to miss the game.

Kenny Shiels has problems of his own, though, with Gavin Peers, John Cofie, Chris Turner, Cathal Farren and David Hopkirk all sidelined as City look to get off to a positive start.

Matching last season’s fourth-place finish is not necessarily a prerequisite for the club adjudging the season to have been a success insists Shiels however.

“Clubs can buy trophies easily enough,” he says. “What we have to do is entertain our supporters and give the city something to be proud of. That is our measure of success.”