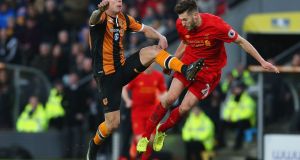 Liverpool midfielder Adam Lallana believes the lack of “winning” experience in the squad has cost them over the last month.

Jürgen Klopp’s side have yet to win a Premier League match in 2017 and their run of two points from a possible 12 has seen them slip outside the top four for the first time since September 24th.

The draw at home to league leaders Chelsea was expected to be the turning point to halt their slide but the team followed that up with defeat at struggling Hull City.

Liverpool’s only league defeats this season have come against Burnley, Bournemouth, Swansea City and Hull – all teams currently in the bottom nine. None of the Reds’ top-four rivals have a similar record with Chelsea losing only to Arsenal, Tottenham and Klopp’s side.

Antonio Conte’s side have dropped just two points in 12 matches against the bottom 10 – grinding out 1-0 wins at Middlesbrough, Crystal Palace and Sunderland – and Lallana believes Liverpool need to discover something similar.

“You can see [Chelsea] have a lot of experience and that they are used to winning,” said Lallana. “They know how to win games even when not at their best. You don’t have to always win by scoring five or six. Maybe that’s an area we need to improve on. We maybe need to realise how good we are at times.

“Milly [James Milner] is probably the only one in our group who has that type of experience because it only comes from winning silverware like he did at Manchester City. Myself and the other players haven’t won titles or loads of cups so we need to learn from him and listen to him because that type of experience is vital. We need to learn and get back to winning ways in the league as soon as possible.”

Being top of the table in November seems a long time ago now and the focus has shifted back to the pre-season aim of qualifying for the Champions League.

Chelsea are a distant 13 points ahead but the former Liverpool winger John Barnes believes the race for the top four will go right down to the wire with Everton, currently seventh, only 10 points from second-placed Tottenham.

“I don’t think Chelsea are out of sight but Liverpool need to improve – the title race starts in March,” Barnes said. “Liverpool can still finish in the top four if everyone gets behind Jürgen Klopp, who is a very good coach.”