Round-up: Leeds come from behind twice to jump ahead of Sheffield United 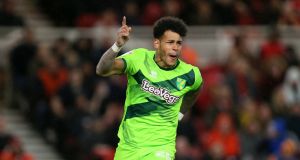 Norwich stretched their lead at the top of the Championship to five points and pulled seven points clear of third place after a 1-0 victory at Middlesbrough.

The Canaries capitalised on an earlier slip-up from Sheffield United, who started the day four points behind in second, as the Blades were beaten 3-2 at home to Bristol City and were leapfrogged by Leeds, who beat Millwall.

Onel Hernandez’s 54th-minute strike gave Norwich a 1-0 victory in the late kick-off at the Riverside which drops Middlesbrough to eighth after a fourth straight defeat.

Norwich have now won seven Championship matches in a row and have won their last five meetings with Boro without conceding a goal.

Leeds twice came from behind to beat Millwall 3-2 and jump above Sheffield United into the automatic promotion places.

Marcelo Bielsa’s side fell behind early on as Ben Thompson gave Millwall the lead before Patrick Bamford missed a penalty for Leeds.

Pablo Hernandez equalised after 34 minutes but a second penalty of the match went Millwall’s way as Liam Cooper brought down Ben Marshall, who got up to bury the opportunity from the spot.

Sheffield United began the day a point clear of Leeds, but their 10-match unbeaten run was ended by Bristol City thanks to Andreas Weimann’s hat-trick.

Billy Sharp fired United ahead after just six minutes with his 23rd goal of the season. Weimann equalised for the visitors, flicking in Jack Hunt’s cross.

Irish striker Scott Hogan grabbed his first Blades goal since he joined on loan from Aston Villa to fire Chris Wilder’s side back in front with 19 minutes remaining, but Weimann notched again to level before sealing his first career hat-trick to damage the Blades’ automatic promotion hopes.

Aston Villa beat Blackburn 2-1 to secure a fifth successive win and strengthen their grip on a playoff spot.

Tyrone Mings doubled their advantage just after the hour. Amari’i Bell pulled one back for Blackburn but Rovers have now won just one of their last 10.

The Lilywhites were seeking a fourth win in a row but fell behind on the half-hour mark as Modou Barrow pulled the ball across the six-yard box to Yakou Meite, who picked out the top corner.

And Barrow was on the scoresheet himself six minutes later, which proved to be the winner despite Jayden Stockley’s added-time goal for Preston.

Martyn Waghorn grabbed a hat-trick as Derby stretched their unbeaten run to four matches and moved into the playoff places with a thumping 6-1 win over Rotherham.

The striker’s penalty fired Frank Lampard’s side in front after 13 minutes, before Bradley Johnson and Waghorn again made it 3-0 at the break.

Mason Mount and Duane Holmes notched either side of Richard Wood’s consolation to make it 5-1, before Waghorn completed his treble from the spot.

His first came after 14 minutes, slotting in from Fraizer Campbell’s pass, before the 30-year-old was set up by Jarrod Bowen to grab his second after 49 minutes.

Bolton picked up just a fourth league win since September to move within five points of safety and worsen QPR’s relegation fears with a 2-1 win.

Wanderers took a shock lead as Will Buckley bundled in on 35 minutes and Callum Connolly made it 2-0 after the break.

Stoke drew their seventh game in eight as their clash with Sheffield Wednesday finished goalless, Nottingham Forest came from behind to claim a 2-1 win at home to Swansea while Wigan and Brentford was also goalless.