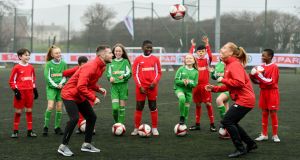 Jack Byrne believes that he can push on to cement his place in the Ireland squad regardless of where he is playing his football over the course of 2020 but the 23-year-old insists that his focus for the moment is Shamrock Rovers and the start of the new Airtricity League season.

The Dubliner is known to be of interest to a number of Championship clubs but it remains to be seen whether any would make the sort of offer required to entice Rovers to sell a player in this window who was absolutely central to their improved league performance and long awaited FAI Cup success last year.

Byrne has just one year to go on his contract and so a summer move or a free one this time next year might just suit all of the parties and the player himself is adamant that he is happy to be heading into a new campaign with targets in his head for progress with both club and country.

“You don’t know in football, what’s going to happen,” he said at an event to promote this year Spar sponsored Primary Schools Fives programme. “I just set a target to get as fit as I possibly could to set my mind on the season starting. The President’s Cup against Dundalk and Bohs the week after; anything could come up in between but that’s my focus.

“I’m honestly just thinking about getting as fit as I can. The fixtures came out and the first game of the season is against Bohs and it excites you; it excites everybody. When that fixture came out I got a good feeling, I want to try and win that game.”

The midfielder’s performances in his two senior international games last week will have done much to persuade Championship managers that Byrne could cope at the level their teams must compete at and there must be a temptation for Byrne to believe that such a move would, in turn, bolster his chances of progressing with Ireland.

He maintains, however, that having had so much support from Mick McCarthy last year, he can continue to progress through what looks set to be the tail-end of the manager’s second stint in charge even if he stays where he is.

“Well, I think I did enough in the Bulgaria game to get called up again so I think that answers that question,” he says.

“I’m very grateful to Mick, Terry Connor, Robbie Keane for taking time out, for pulling me, every time I leave an Ireland camp,” he says. “They won’t send me away without giving me advice; telling me, ‘this is what you need to work on, this is what you need to do if you can’t to become a better player.’ Not just to play in their team but just to become a better player for myself.

“When I first got called up to the squad in March, Mick had told me to work on certain stuff. Then there was a squad in the summer that I wasn’t involved with and he rang me up and told me: ‘Look, this is basically why you aren’t going to be involved,’ and I said: “yeah, okay, I’ll go and work on it’.

“He didn’t have to do that. He didn’t have to make that phone call. But I went away and worked on it and then when I was called up to the next couple of squads, I think he could see the improvement in my game, that I was trying to work on the stuff that he was saying and I obviously got two caps towards the end of the year.”

The work continues, he admits, but he has taken what McCarthy has said to him on board, most obviously about doing more to make his presence felt when his team doesn’t have the ball but also, he says by “adding goals and assists...and being able to be trusted in a starting 11.

SPAR5s blitzes are open to boys and girls from 4th, 5th and 6th classes. Schools can register until February 14th at www.fai.ie/primary5

Rugby Stats: Ireland wary of Peyper calling the tune as they head for Twickenham

Sonia O’Sullivan: Four into one won’t go as Irish sailors vie for Tokyo place 07:00
Rugby Stats: Ireland wary of Peyper calling the tune as they head for Twickenham 07:00
David Brady says he has witnessed the illegal payments of GAA managers 06:00
Owen Doyle: Day of the jackal may be coming to an end 06:00
Meath glad to have rising senior stars available for Dublin test 06:00

1 Andy Farrell ticking all the boxes in advance of England showdown
2 Players impressed with Bono’s Irish pride and desire
3 Rugby Stats: Ireland wary of Peyper calling the tune as they head for Twickenham
4 David Brady says he has witnessed the illegal payments of GAA managers
5 Owen Doyle: Day of the jackal may be coming to an end
Real news has value SUBSCRIBE

Rugby Stats: Ireland wary of Peyper calling the tune as they head for Twickenham