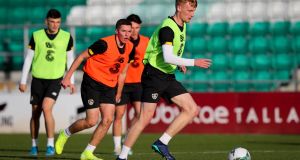 Recently relegated UCD have lost two of their under-21 internationals with central defender Liam Scales following the now well-trodden path from Belfield to Tallaght while goalkeeper Conor Kearns has moved to St Patrick’s Athletic.

Scales, who featured in both of Stephen Kenny’s side’s qualifiers this month and started the scoreless draw against Italy in October, links up again with former UCD team-mates Gary O’Neill and Neil Farrugia at Shamrock Rovers.

He is likely to be featuring alongside the Airtricity/Soccer Writers’ Association player of the month, Joey O’Brien, for the Dublin club next season.

The 32-year-old picked up the final monthly award of the season on Wednesday for his performance in the FAI Cup final which Shamrock Rovers won after beating Dundalk in a penalty shootout.