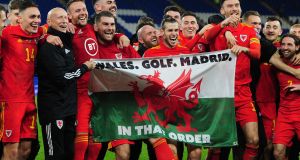 Gareth Bale and his Wales teammate celebrate with the flag after their win over Hungary in Cardiff. Photograph: Athena Pictures/Getty Images

It was Pedja Mijatovic who started it. One night on the radio, the former Real Madrid player and sporting director said he hadn’t spoken to Gareth Bale but the impression he got was that his priorities were Wales, golf, and Madrid - and in that order. That sounded pretty good to Wales fans, already on his side. Songs followed swiftly and so did the flags. One of them found its way on to the pitch and into the players’ hands as they celebrated reaching Euro 2020. Dancing about and grinning right behind it is Bale, enjoying the silliness of it all, the caption covering half his body: “Wales. Golf. Madrid. In that order.”

Bale had said he was aware of the chant, the slogan, and here it was in black and white (and green and red). “I’ve heard it, especially when I was on the bench, and the boys were laughing,” he explained. “It’s a good bit of fun.” Which it may be to him, although there is something pointed in it too, but a lot of people don’t see the funny side. Some of them are at the Santiago Bernabéu: Madrid are not amused. This has not pleased anyone there, but nor has it entirely surprised them: there is a sense that this does not break anything, exactly; it merely underlines that something was already broken. It was a joke, they know, but not in great taste and with a message attached to it - if only because he didn’t distance himself from it.

Yet if they didn’t see the funny side, many didn’t see the point either - starting with the fact that this is a message delivered tongue in cheek. “Bale mocks/disrespects/provokes Real Madrid” the many, many headlines run on Wednesday morning. But it is not so much Real Madrid that line mocks as what some see as the media agenda against him. Often, the media here claims to speak in name of supporters, and there is something in that, many of them far from happy with Bale, but some Madrid fans embrace the words of the Wales fans: they see it instead as someone poking fun at the media and the sometimes toxic environment around the club, saying the things that too few in Spain will say.

At times, the coverage has been a little daft and very pointed, it is true. Golf has become a running joke, a punchline flogged to death. At times it can feel like no one can resist, endlessly resorting to some forced golfing reference. As if enjoying a round was the most heinous of crimes, eclipsing all else, definitive proof that he just doesn’t care. La Libreta de Van Gaal, a comedy podcast dedicated to the sillier moments in the sports media, put together a montage of golf-related sentences handed down to Bale, accompanied by the sound of a swinging club. There clips were many - and that’s just the ones that made it into the show.

There is something of that in this banner, mocking the press: you want golf? You call him the golfer? Here, take golf.

One front page of the sports daily AS listed three things he had done that concerned Madrid - pushing for a January departure, wanting to play for Wales after a month out, leaving matches early and heading off to London rather than training - and used a photo of him on the golf course. “Triple Bogey,” the headline read. “I’ve never had one of those in my life,” Bale said, laughing. “At least make it an albatross.” He claimed that he doesn’t read anything; occasionally, though, friends send him “funny pictures”. There have been a lot of them; countless column inches and hours of radio and TV.

When Bale recently said that playing with Wales was different, that was seized upon as proof too. Few listened to the original remarks, which were reasonable enough, and not offered up directly in response to the difference between playing for club and country but the idea of breaking out of the “robotic” chore of professionalism. He talked about how playing with men he had known since they were kids was like being down the park on a Sunday, a kickabout with friends. He insisted that did not mean he ever gave anything less than his all, whoever he was playing for. He also said it was easier in his own language - another stick with which he is beaten. But there it was: more proof that he likes Wales more, ergo he doesn’t like Madrid at all.

The banner is a laugh. And yet, importantly, Bale surely knows that most won’t find it funny. He knows it can damage his relationship there, that it will wind many up. The thing is, he does not appear to care. Or perhaps more accurately, he does care: he seems to welcome it, enjoy making a point or having others make it for him. Many a true word said in jest and all that. It is hard to avoid the conclusion that there’s something pointed in this too, a tightening of the screw. As if he embraces the irritation it causes. Make no mistake, while there’s an element of poking fun at the press, some of this is aimed at the club too.

Bale is not happy, nor is he prepared to back down. Nor are Madrid. The relationship is poor. And beyond all the problems that were already there, the debates and the arguments about whether he was the star he should have been, about his status and his success, about his willingness or not to embrace the club and the country, about his non-existent relationship with Zidane, there is more this season.

In the summer, he had been on the verge of a departure to China, only for the deal to break down when Madrid shifted their demands. So, he stayed and started this year. He played reasonably well, too. The fans even applauded him, having whistled him last year. He’d been gone, everyone thought, especially him, but there he was. It might have been a second chance, a fresh start; but it wasn’t. There was a hangover from everything that went before, which was only deepened by the fact that his departure had not been completed after Zidane had publicly welcomed that departure. “I’m playing, but I wouldn’t say I’m playing happily,” he said at the start of the season.

Nothing changed. Or if it did, it got worse. He had felt gone, and perhaps there is an element of liberation in the mind of a man who had virtually left, a boldness in his behaviour. There is also a sense of defiance now, a challenge laid down. It may be a joke but it also feels deliberate, a point made, a role played, pressure building. Like Bale is forcing the issue. And that flag, those celebrations, do not appear in isolation. Bale has left games early when he has not played - what time Gareth Leaves the Bernabéu has become almost a game - he went back to London, leaving Zidane to explain. He appeared disengaged, distant. Above all, he played for Wales, got injured, didn’t play for Madrid, and then came back just in time to play for Wales again.

Injury was coincidental, he said: when he is fit, he will play for anyone and give everything. It is also true that in his first game back with Wales he only lasted an hour. But that irritates. It reinforces that sense that Madrid are third in his list of priorities. Some suspect that it is not chance, but entirely deliberate, that he no longer cares about playing at the Bernabéu, that message magnified at every step.

“Bale will never be a legend at Real Madrid,” wrote Rubén Jiménez in Marca on Wednesday, merely the most pointed of a lot of voices, speaking for many - and that point is a pity, given what he has won. His legacy is indeed effected.

“Yet again, and we have lost count now, Bale has disrespected Madrid and their fans,” Marca continued. “He mocked the institution with a flag that makes it clear that the last of his priorities is the club that pays him (and not a small amount). And then he will act all surprised when the Bernabéu whistles him. And then his agent, Jonathan Barnett, will come along and ask the fans to kiss his feet. Yes, this is the guy who scored at Mestalla, but it’s also the guy who doesn’t watch his teammates play because he prefers golf. This is the slow agony of a candle dying out, and all that is left is resentment. Real Madrid have taken too long to cut him loose.”

Right now, an exit appears the only solution, but that’s not so simple. In the summer, Madrid had the chance but it didn’t happen, leaving everyone where they were. And as the flag says, there may be places Bale would rather be. - Guardian

Leona Maguire left playing waiting game 21:52
Barcelona and Bayern battle for right to take on nouveau riche 20:44
Caldwell makes himself at home at Celtic Manor 20:32
Anderson swings back into form against Pakistan 19:52
Selby strikes back against O’Sullivan 18:44