Gary Deegan leads by example as Shels all but seal safety 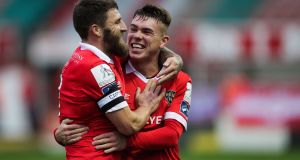 Captain Gary Deegan led by example to all but secure Shelbourne’s place in the Premier Division for next season with a first half winner at Tolka Park.

Ian Morris’ side then had to show commendable resolve over the last 20 minutes or so when playing with 10 men following Luke Byrne’s sending off.

Shelbourne’s first back-to-back wins of the season sees them leapfrog Sligo up to sixth place in the table on goal difference to move eight points clear of the relegation playoff place.

An early injury to right-back Georgie Poynton scarcely unsettled Shels as his replacement, Daniel O’Reilly, began the move that led to the game’s only goal on 20 minutes.

O’Reilly’s ball down the line put Ciarán Kilduff in behind the Sligo defence. The low cross was cleverly dummied by winger Dayle Rooney for Deegan to arrive into the area to blast to the roof of the net.

In an open game, Sligo spurned their best chance of the first half five minutes before the interval.

Jesse Devers skipped past Shels left-back Alex O’Hanlon to find Ronan Coughlan with a low cross. And though the dink beat Jack Brady, it sailed just over the Shels keeper’s crossbar.

Sligo began the second half on the front foot with Ryan de Vries and Coughlan having chances inside four minutes.

Shelbourne then had to hang on from the 69th minute after Byrne was shown a straight red card for an over the ball challenge on Junior Ogedi-Uzokwe.