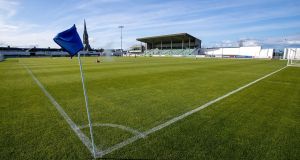 Preparations for the new season in the First Division of the Airtricity League were thrown into renewed chaos on Friday evening when the FAI issued a statement saying that it had agreed to allow Limerick to apply for a licence to participate.

The club had not been invited to apply along with other clubs in the latter part of last year due to the financial problems it had experienced over the course of the campaign, with wages not paid for prolonged periods of time and the club itself ultimately entering examinership, a process that subsequently failed.

Contrary to expectations, the club has not been liquidated since and its owner, Pat O’Sullivan, issued High Court proceedings aimed at reversing its exclusion from the league. After prolonged negotiations between the two sides outside the court on Thursday and Friday, the association has now backed down.

Whether the club gets beyond the application stage remains to be seen but its place had already been allocated to a second side from Shamrock Rovers and with other clubs already insisting they will refuse to play that game, the inclusion of Limerick would add to the uncertainly and cause even more fixture problems.

The FAI now says a decision on the matter will be taken “next month”.