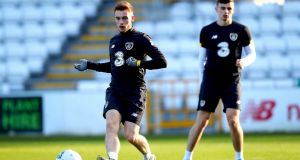 Ireland under-21 international Connor Ronan has joined League One side Blackpool on loan until the end of the season. Photograph: Ryan Byrne/Inpho

Two of Stephen Kenny’s Irish under-21 squad have made loan moves until the end of the season with Connor Ronan joining League One side Blackpool after having returned to Wolves from Slovakian side Dunajska Streda and Aaron Drinan heading to Scottish Championship side Ayr United from Ipswich.

Ronan, who earned nine under-21 caps during 2019, was a key figure for Kenny over the course of the year, featuring in every one of Ireland’s games in Toulon and making a tremendous impact after coming on at half-time in the qualifier against Sweden, where Ireland came from behind to win 4-1.

Having made his debut for Wolves as an 18-year-old he has struggled to get any sort of opportunities back at the club and this will be his fourth loan spell away. He is hugely well regarded by Kenny, however, and has generally done well at the clubs he has been with, something Blackpool manager Simon Grayson acknowledged as the signing was announced.

“Connor’s an exciting player and the type of player that we’ve been missing this season,” he said. “A lot of people speak highly about him and he’s had some good experience out in Slovakia, as well as internationally for Ireland at under-21 level. We’re looking for him to get on the ball, pick a pass and add something different to the squad.”

It was Paul Lambert who gave Ronan his debut at Molineux and the now Ipswich boss believes that a spell playing regular first team football at Ayr will help the development of Drinan, who had spent the week training at the club with young club-mate Brett McGavin.

“They enquired about the lads. I know what Scottish football is like and you’ll get absolute honesty up there, that’s for sure. It will be an eye-opener for them to see what it’s like against men.”

Greg Cunningham, meanwhile, has returned to Cardiff City from Blackburn Rovers in order to continue his rehabilitation from a cruciate ligament injury.

The four times capped 28-year-old left back, who has been unfortunate with injuries, was forced off in the 17th minute of Blackburn’s defeat at QPR back in early October in his 10th game of what was up until then a highly productive loan spell. It is not clear whether he will be fit again in order to play against this season.

Former Republic of Ireland striker Simon Cox has joined A-League side Western Sydney Wanderers until the end of the 2020/21 Australian season. He had scored two goals in 24 appearances for League one side Southend United over the first half of the season.