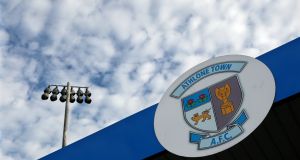 The FAI has confirmed that a number of people connected to Athlone Town have been charged with breaches of its rules in relation to gambling or match-fixing.

The news comes two months after the association launched an investigation into Athlone’s 3-1 League defeat by Longford Town on April 29th at the behest of Uefa who said in an initial report into betting patterns on the game that: “there is clear and overwhelming betting evidence that the course or result of this match was unduly influenced with a view to gaining corrupt betting profits.”

The FAI has not said who is to be brought before the disciplinary committee that is to be convened to deal with the case on August 3rd, only that “charges have been brought against members of Athlone Town”.

It is believed, however, that two players are to be charged after an assessment made of their performance in the game concluded that there was a case of “manipulating matches” to answer.

It is also understood that another player and a club official may be charged with betting on games contrary to rule number 106. It is not known if the alleged bets are related in any way to the Longford game and they may well be entirely unconnected to any suggestion of manipulation.

The association also says that charges of “bringing the game into disrepute” are to be brought against some or all of those affected.

In a statement released on Saturday night, the Athlone Town board and management committee outlined their disappointment with the FAI’s decision to bring charges.

It read: “The board and the management committee of Athlone AFC are disappointed with the FAI’s decision to bring charges against members of the club as part of the investigation into alleged match fixing.

“It is important to note that no finding has been made against the club itself, something which Athlone Town AFC welcomes.

“In recent hours the club has received documentation from the FAI detailing the charges it has brought against certain individuals.

“Athlone Town AFC’s board is currently in the process of assessing that material. A further statement will be released after the basis of the charges have been fully examined.

“The club also awaits the production of all the evidence related to the allegations the individuals have been charged with from the FAI in advance of the disciplinary hearings scheduled to be heard by an Independent panel in early August.

“The club would like to remind the public and the media that everyone at Athlone Town AFC denies being involved in match fixing/match manipulation of any sort.

“At this point in time no finding of wrongdoing has been made against any coach, player or official at the club.”